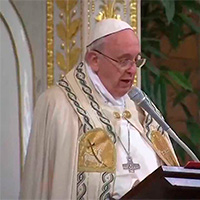 On Friday Pope Francis travelled to the southern Italian town of Molfetta to mark the 25th anniversary of Don Tonino Bello. During the homily he held up the figure of Don Tonino as a true witness of Jesus who goes forth into the world bringing the Gospel message of hope and mercy into the most difficult "tabernacles of misery, pain and solitude".

Pope Francis has urged Christians to be “couriers of hope,” “genuine witnesses of Jesus in the world”.

The Pope’s exhortation to leave the Lord’s table after the Eucharist and to be active in bringing His message of peace and mercy into the world, came during the homily at Holy Mass in the southern Italian town of Molfetta where he travelled to pay tribute to Fr. Tonino Bello who was known as “the pastor of mercy” and the bishop of “the last ones.

Addressing the crowds gathered for Mass in the port area of the coastal town, Pope Francis commented on the liturgical readings of the day which focus on two central elements for Christian life: Bread and the Word.

The Bread of Life and of Peace

Pointing out that bread is the essential food for living and Jesus in the Gospel offers himself to us as the Bread of Life, the Pope said the Eucharist is not just a beautiful rite, but a communion of love that calls on each Christian to be nourished by the Lord in order to then give him or herself to others.

“As Don Tonino Bello recalled, works of charity are not enough, if the charity of works is lacking, if the love in which the works are conceived is lacking, if the starting point which is the Eucharist is lacking, every pastoral commitment is only a merry-go-round” he said.

Living for others is the trademark of a Christian

And remarking on the fact that living for others is the “trademark” of a Christian, the Pope said “One could post a warning outside every church: ‘After Mass one no longer lives for oneself, but for others’.

Don Tonino lived like this, he said, amongst his people he was a Bishop-Servant, a Pastor whom, before the Tabernacle, “learned to be eaten by the people”.

“He dreamed of a Church that is hungry for Jesus and intolerant to worldliness, a Church that sees the body of Christ in the uncomfortable tabernacles of misery, suffering and loneliness”.

And reiterating that the “Eucharist cannot stand sedentariness” Francis invited the faithful to ask themselves whether they ‘like to be served at table by the Lord, or do they get up and serve like the Lord?’ ‘Do they give back in life what they receive at Mass?’

“And as Church we could ask ourselves: after so many Communions, have we become people of communion?” he said.

The Bread of Life, the Pope continued is also the Bread of Peace, and as Don Tonino maintained, peace comes with conviviality, in “eating bread together with others”, because conflict and war, he said, are rooted in not knowing the other.

“We, who share this Bread of unity and peace, are called to love every face, to heal every tear; to be, always and everywhere, builders of peace” he said.

The Word that saves

Turning to the theme of the “Word”, the Pope said there is nothing to be gained by just “discussing the words of Jesus.”

The Word of Jesus, he continued, “is to walk in life, not to sit down and talk about what goes and what does not go”.

Don Tonino, he said, urged his people to move from words to deeds, encouraging and supporting those who did not have the courage to change.

Reflecting on the first Reading in which the risen Jesus addresses Saul and asks him to put his life at stake saying “Get up and go into the city and you will be told what you must do”, the Pope said the first thing to avoid is to ‘not get up’, to submit oneself to life, to be gripped by fear”. Don Tonino, he said, used to say “Stand up!” Because one must stand before the Risen One: “one must stand up and look up because an apostle of Jesus cannot just get by in life with small satisfactions”.

The Lord, the Pope said, asks each of us to go forth, to have the courage to leave our comfort zones and to take risks.

“A Christian life must be invested for Jesus and spent for others” he said.

As Don Tonino used to say, he continued, “Whatever situation we find ourselves in, we are called to be bearers of Easter hope, servants – not employees - of the world”.

It is nice to be "couriers of hope", simple and joyful distributors of the Easter alleluia” he said.

Finally Pope Francis invited those present to be humble, because humility does not mean being shy or resigned, but docile to God, and empty of oneself.

And once we are stripped of presumption and pride he said, the Word of God frees us, it allows us to move forward, “humble and courageous at the same time”, it does not make us protagonists or champions of our own skills, but genuine witnesses of Jesus in the world.