Vatican
News
Christ gives true freedom
True Christian freedom means having the clear-minded openness to make room for God in our lives and to follow Jesus. 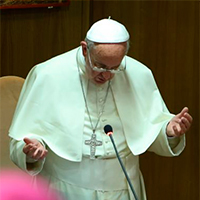 In his homily at Mass on Friday morning in the Casa Santa Marta, Pope Francis says true Christian freedom means having the clear-minded openness to make room for God in our lives and to follow Jesus.

Pope Francis at Mass on Friday morning reflected on three examples of freedom – the Pharisee Gamaliel, the Apostles Peter and John, and Jesus – saying true freedom means making room for God in our lives and following Him.

The freedom we hear about during this Easter season, the Pope said, is the freedom of the sons and daughters of God. Jesus gave us this freedom “through his redemptive act” on the Cross.

Pope Francis said Gamaliel is the first example of freedom offered by the day’s readings. He was a doctor of the law and Pharisee, who persuaded the Sanhedrin to free the apostles Peter and John.

Gamaliel, the Holy Father said, was “a free man, who reasoned with a clear mind”, and he convinced his colleagues that “time would take its toll” on the Christian movement of his day.

“The free man is not afraid of time: he lets God do the work. He allows God to take His time. The free man is patient. [Gamaliel] was a Jew, not a Christian, and he had not recognized Jesus as the Savior. But he was a free man. He thought things out and offered his ideas to others who accepted them. Freedom is not impatient.”

The Pope said Pilate also reasoned well with a clear mind, realizing that Jesus was innocent. But, not being free, he could not overcome his desire for a promotion. “He lacked the courage of freedom because he was a slave to his career, ambition, and success,” the Pope said.

Pope Francis then spoke about the second example of freedom, Peter and John. They had healed the paralytic, were hauled before the Sanhedrin, and were released after being whipped, despite being innocent.

The Holy Father said, “They went away happy for having been judged worthy to suffer for the name of Jesus.” This, he said, “is the joy of imitating Jesus. It is another type of freedom that is greater, wider, and more Christian.”

Jesus: the best example of freedom

Pope Francis said the third and truest example is Jesus himself.

When he had miraculously multiplied the loaves in the desert, Pope Francis said the people had come to make him a king. But he escaped to the mountain to avoid that fate. “He avoided triumphalism and was not fooled by it. He was free, since his freedom was to do the will of the Father.” Pope Francis said Jesus would end up on the Cross. So, he said, “Jesus is the greatest example of freedom.”

“Today let us think about our freedom. We have three examples: Gamaliel, Peter and John, and Jesus. Do I possess Christian freedom? Am I free, or am I a slave to my passions, ambitions, riches, or passing fancies? It seems like a joke, but many people are slaves to fashion! … Let us reflect on our freedom in the midst of a ‘schizophrenic’ world. It shouts ‘Freedom, Freedom, Freedom!’ but is really a slave. Let us reflect on the freedom that God gives us in Jesus.”