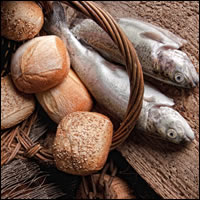 After this, Jesus went across the Sea of Galilee. A large crowd followed him, because they saw the signs he was performing on the sick. Jesus went up on the mountain, and there he sat down with his disciples. The Jewish feast of Passover was near. When Jesus raised his eyes and saw that a large crowd was coming to him, he said to Philip, "Where can we buy enough food for them to eat?" He said this to test him, because he himself knew what he was going to do. Philip answered him, "Two hundred days' wages worth of food would not be enough for each of them to have a little." One of his disciples, Andrew, the brother of Simon Peter, said to him, "There is a boy here who has five barley loaves and two fish; but what good are these for so many?" Jesus said, "Have the people recline." Now there was a great deal of grass in that place. So, the men reclined, about five thousand in number. Then Jesus took the loaves, gave thanks, and distributed them to those who were reclining, and also as much of the fish as they wanted. When they had had their fill, he said to his disciples, "Gather the fragments left over, so that nothing will be wasted." So, they collected them, and filled twelve wicker baskets with fragments from the five barley loaves that had been more than they could eat. When the people saw the sign he had done, they said, "This is truly the Prophet, the one who is to come into the world." Since Jesus knew that they were going to come and carry him off to make him king, he withdrew again to the mountain alone.

Introductory Prayer: I come before you, Lord, poor and unworthy. Yet you welcome me with such love. With my effort during this meditation I want to make a small return on your great kindness.

Petition: Lord, help me to understand the trials you send me and to value your gift of grace.

1. The Trials of Life: The Gospel tells us that Jesus “tests” the disciples, watching the reaction they have to seemingly impossible situations. This test in the shortage of food may well have induced a panic. As the apostles looked out at the vast crowd, they felt totally inadequate in the face of such need. Perhaps in that sense, they passed the test. Christ wanted them to experience that human ingenuity alone could not be the foundation of the Church. No matter how smart the apostles or their successors are, the needs of the souls and the world will always vastly outstrip our human capacity. So, what’s the answer? There’s only one: The Lord!

2. The Insufficient Gift: While the disciples are confused, a little boy is generous. With innocence and simplicity, he walks up with his basket. With this food, the Lord will do something wonderful. Perhaps Our Lord was thinking about this boy when he said, “Unless you become like a child, you will not enter the kingdom of heaven.” The disciples are being given a beautiful lesson in this trusting child: give everything over to Christ; it doesn’t matter how little it may seem to you or others — with his divine power, wonderful things can happen with our five loaves and two fish.

3. Let Nothing Be Wasted: It’s interesting that Our Lord sends out the disciples as a cleanup crew after this big meal. One insight that we can draw from this is the value of God’s grace. Even though the Lord’s power is infinite, we should not become complacent and view his grace as some commodity in oversupply. It is precious and should not be wasted. Yet, that would seem to be exactly what happens. We have received so many sacraments, but we are far from being saints. This speaks to us again of the marvelous patience of the Lord. Even when we don’t fully appreciate the value of his gifts, he doesn’t stop giving them.

Conversation with Christ: Lord, I see the compassion in your eyes when you look out at the vast crowd. They are hungry, but I am poor and weak in the face of such need. Come to my aid! Give the grace I need to cooperate generously with you in the ongoing work of redemption.

Resolution: I will be generous in helping others, trusting more in God’s grace than in myself.