Learn to pray
Sr Clare Crokett
The film “All or Nothing: Sr. Clare Crockett” 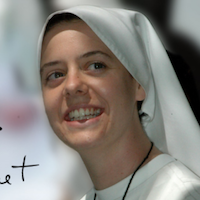 On Saturday April 16, 2016, Sr. Clare Crockett passed away with five young aspirants to the Servant Sisters of the Home of the Mother. She was 33 years old when she died in the collapse of the Holy Family School’s main building, as a result of an earthquake in Playa Prieta in Manabi, Ecuador

That day and the weeks that followed were very painful moments for the community of Servant Sisters of the Home of the Mother. However, to our surprise, when we started to talk about Sr. Clare, her memory was not painful. We discovered that her loss afflicted us, while her memory filled us with joy. It is as if Our Blessed Mother extended a mantle of peace and joy over our hearts.

The next surprise was that many people spontaneously wrote to tell us how Sr. Clare was helping them. Many were friends and acquaintances, but many others—even more surprising—were strangers who spoke to us of conversions, vocations discovered or recovered, and special graces. There are very impressive stories.

We began to publish memories, short letters, and thank-you notes that arrived. Suddenly, a crazy idea came to mind: “Why not make a film about her life” The EUK Mamie Foundation and HM Television began recording testimonies and gathering together material. Her family, childhood friends, witnesses of her conversion, and people who shared so many moments with her throughout her 33 years of life were interviewed. A year of intense work followed, but we feel that we have gotten to know our Sister better.

Now, finally, the moment has arrived. The film “All or Nothing: Sr. Clare Crockett” will be released on April 16, 2018, on the second anniversary of her death.

We have opted for a method of distribution that seemed to go well with Sr. Clare: a form that is cost-free and apostolic.

Anyone can request the film to come to his or her city through this form: https://www.sisterclare.com/multimedia/film/request?view=form

In order for the film to reach a city, there must be someone willing to organize its viewing for a group at a parish, school, university, or in an auditorium or theater. The important thing is that the organized event does not have a economic purpose but an apostolic one: with the desire that God’s love, which changed Sr. Clare, may be proclaimed through her life. The only manner in which the payment of an admission ticket may be accepted is in the case of the need to rent a theater to show it in, in which the cost of the theater alone would be accepted.

We encourage groups to be organized! It may well be a moment of grace for many people. Once the form has been filled out, we will contact each person in order to work with them to find the best way to organize it.

For the moment, the film “All or Nothing: Sr. Clare Crockett” will be released for sure in Spain, the United States, Ireland and Ecuador on April 16, 2018. We will publish more information soon so that everyone who desires to participate may do so.

To those who have requested the film in their city, but cannot commit to organizing a group, we will notify them of the possibilities to join public screenings in their cities.

One year after the premiere, when the film has traveled throughout the world, it will be made public on the internet so that everyone may view it freely.

May Our Blessed Mother bless you all,