Vatican
News
God is close to his people.
The Lord always comes to us. 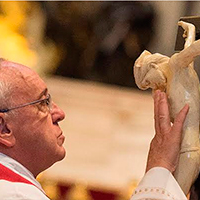 In his Chrism Mass homily Pope Francis said that the readings from the Chrism Mass made him think of the passage from Deuteronomy: “For what great nation is there that has a god so near to it as the Lord our God is to us, whenever we call on him?” (4:7)

The Pope observes that the Servant presented in Isaiah (61: 1-3, 6, 8-9), and King David presented in Psalm 88 are illustrations of how God draws near. Revelation 1:5-8 tells us that “the Lord always comes to us.” And the Gospel (Luke 4:16-21) shows us that, although Jesus could have chosen to be a scribe, “he wanted to be an ‘evangelizer,’ a street preacher,” Pope Francis says. “This is God’s great choice: the Lord chose to be close to his people.”

Closeness is key for evangelization

Closeness is “an attitude that engages the whole person, our way of relating, our way of being attentive both to ourselves and others,” the Pope continues. People use the term “he is close to us” when describing a priest who is present to them and knows how to speak to everyone.

“Closeness is crucial for an evangelizer because it is a key attitude in the Gospel,” Pope Francis explains. It is the key to mercy as well as the key to truth because it shortens distances—as demonstrated in the parable of the Good Samaritan. Can distances “be shortened where truth is concerned?” the Pope asks. Yes, he answers, because truth is not only objective, but is also fidelity. “It makes you name people with their real name, as the Lord names them, before categorizing them or defining ‘their situation.’ ” Making truth an idol “distances ordinary people from the healing closeness of the word and the sacraments of Jesus.”

Mary, “Our Lady of Closeness”

As a mother, Mary is near to us. She “sets out ‘with haste,’ to serve”, and she was near enough to others’ situations that she knew what their needs were. “At the right moment in Cana, the tone with which she says to the servant, ‘Do whatever he tells you,’ will make those words the maternal model of all ecclesial language,” Pope Francis says.

Pope Francis proposes three areas where the “same motherly tone” of Mary needs to be heard by those to whom priests minister.

* Closeness in spiritual conversation: like Jesus’ conversation with the Samaritan woman in which Jesus first teaches, then “gently helps her to acknowledge her sin,” and then “infects her with his missionary spirit.”

* Closeness in preaching: like Peter’s preaching on the day of Pentecost which “cut his listeners to the heart,” leading them to ask, “What shall we do?” (Acts 2:37). This is “a question (…) we must always raise and answer in a Marian and ecclesial tone,” Pope Francis continues.

Being close to the people brings the priest close to God

In conclusion, Pope Francis urges priests to “draw nearer to your people,” and to “approach the Lord in his Word” when they feel far away from God and from people. He encourages them to walk with their people as a shepherd—sometimes in front, sometimes in their midst, sometimes behind. More than just appreciating priests like this, people “feel that there is something special about him: something they only feel in the presence of Jesus.”