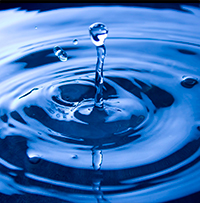 Pope Francis has already made it clear that the availability and care of the world’s water sources must be a global priority. In his encyclical Laudato Si’ (On Care for Our Common Home), the word “water” appears 47 times—22 occurrences within articles 27-30 which treat the subject of water specifically.

In this encyclical, Pope Francis expresses his concerns: the waste of water, a sustainable supply of fresh drinking water, the quality of the water available to poorer populations, water-related diseases, the threat of the pollution of underground water supplies, the privatizing and commoditization of water, and the future consequences that the lack of water will have on food supply and international relations.

Pope Francis: ‘Water’ the most essential element for life

Pope Francis proposes that the “problem of water is partly an educational and cultural issue”. Against the prevalent and growing abuse of water, Pope Francis has strong words.

“Access to safe drinkable water is a basic and universal human right, since it is essential to human survival and, as such, is a condition for the exercise of other human rights.” (Laudato Si’, 30).

Laudato Si’, however, states quite clearly what previous Popes, and the Holy See, have been saying for years. For example, in 2003, on the occasion of the Third World Water Forum in Kyoto, Japan, the Holy See presented a document entitled Water: An Essential Element for Life. Here, the Holy See states that the protection of water is a major factor in the development and sustainability of society. The Holy renewed its concerns in the Fourth and Fifth Water Forums in Mexico City (2006), and Istanbul (2009). The Holy See’s latest contribution in 2012 for the Sixth Water Forum held in Marseille contains many of the same concerns presented by Pope Francis in Laudato Si’.