Vatican
News
Obedience to the Gospel
In his fourth Lenten meditation on Friday, Fr. Cantalmessa focuses on the place of obedience in the Christian life. 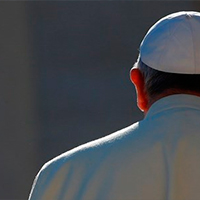 In his fourth Lenten meditation on Friday, Fr. Cantalmessa focuses on the place of obedience in the Christian life.

Obedience to the Gospel

St Paul and the other disciples of Jesus were taking their first steps in society with an understanding that were following someone whose “kingdom was not of this world.”  They began to understand that “obedience to the state is a result and an aspect of a much more important and comprehensive obedience that the apostle calls ‘obedience to the gospel,’ ” says Fr  Cantalamessa. Every type of Christian obedience must be rooted not in obedience to human beings, but to God.

Fr Cantalamessa uses the image of the main thread of a spider’s web. The spider used this main thread to construct its web and once done, “the center thread is what holds together all of the spider’s weaving; without it everything collapses.” If any other thread breaks, the spider can repair the web. But if the central thread breaks the spider abandons the web and begins work on another. Such is obedience in any human organism, including the Church.

The obedience of Christ

Christ, the “Obedient One” is the head of  those who choose to be “obedient in opposition to Adam who was the head of the disobedient,” Father Cantalamessa continues. As Christians, Paul tells us that Christians have freely submitted ourselves to Christ on the day of baptism. Therefore, “with baptism there came a change of masters, a shift of kingdoms: from sin to righteousness, from disobedience to obedience, from Adam to Christ.”