Dating & Engaged
Relationships
A young people living in Sudan
They moved to Uganda to work with refugees. 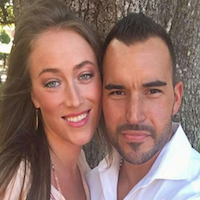 Selling everything and moving to Uganda to work with refugees is not likely on many people's to-do list. In fact, it's probably the last thing most would consider, especially young couples hoping to start a family.

But it's exactly what Rachel and Rich Mastrogiacomo did last year.

Their story began when a series of devastating events and realizations would lead the couple to the edge of a war zone in the heart of east Africa, bring them face to face with abject poverty and eventually lead them to the recent adoption of their new daughter.

Though seeds were planted in both of their lives much earlier, the story began when the two got married in 2014. Like any other couple, they were excited about their new life together and eager to start a family.

However, their initial enthusiasm was quickly replaced by pangs of sadness and disappointment as the couple slowly began to realize, after months of trying to become pregnant, that they were facing infertility.

This pain was sharpened in 2017, when three foster children living with the couple were unexpectedly returned to their birth mother.

It was after this that Rachel and Rich began to feel an inkling that they were being called to something specific – something they would discover through a process of prayer and radical openness to God's will and the signs that he provided along the way.

“It’s a blessing to have received this unbelievable gift when we least expected it; God’s fingerprints are all over it.”

Shortly after their foster children were reunited with their biological mother, Rachel and Rich attended a healing Mass. At the end, as Rachel was praying, a woman tapped her on shoulder, and told her, “I heard Jesus say, 'She will be a mother to many.' You're healed.”

Around the same time, Rich – who says he never has dreams – said he had a very vivid dream of his wife standing on brownish-reddish dirt with trees all around. In the dream, Rich said Rachel was holding a baby and was surrounded by children, and as he looked at her, she smiled at him with a peaceful expression.

After the dream, Rich began to research South Sudan, and came across multiple articles detailing the horrors of the country's ongoing conflict and the millions who, having fled war and famine in their homeland, are now living as refugees in neighboring countries. Uganda in particular has been one of the main refugee destinations.

Rich began emailing bishops in the area, and immediately got a response from Bishop Sabino Ocan Odoki of Arua, in northern Uganda, saying Rich's email was an “answer to prayer,” as he had more than a million Sudanese refugees in his diocese and had been praying for lay missionaries to come from America.

The contact with Bishop Odoki – whose diocese sits closely along borders with the Democratic Republic of the Congo and South Sudan – was seen as providential by Rachel and Rich, because ever since she was 10-years-old, Rachel had a special love for Sudan – she told CNA that her father put an image of starving Sudanese children her age on the refrigerator in hopes of fostering a sense of gratitude in her.

When Bishop Odoki said he wanted them to come and serve for a month-long “trial run,” the choice was obvious. The couple sold everything and went to Arua in the spring of 2017 with the Family Missions Company.

“There are no words to describe the intense human suffering that we saw among the refugees,” Rachel told CNA Feb. 22.

“It was unlike anything we’ve ever seen, unlike slum poverty. Never have we seen such a vast amount of people living in such poor conditions,” she continued.

South Sudan has been split by a brutal civil war for the past three-and-a-half years. The conflict has so far prompted some 4 million citizens to flee the country in search of peace, food and work. In August 2017, shortly before Rachel and Rich traveled to Uganda, the African nation had taken in their one-millionth refugee, and the number has continued to climb.

Roughly 85 percent of the refugee settlements Rachel and Rich served are made up of women and children, they said, and while many humanitarian organizations on the ground try to help meet basic needs, “the overall need is absolutely overwhelming.”

They specifically visited the Palorinya refugee settlement in Uganda's Moyo region, which is the second biggest camp in northern Uganda and as of November 2017 housed some 185,000 refugees, according to Reuters.

While in Arua, Rachel and Rich were able to tour the diocese and participate in the centenary celebration of Moyo Catholic parish, which is the first parish of the diocese of Arua. They also spent time visiting orphans, schoolchildren and youth in prison, and distributed both gifts and donations.

“[We] just loved on the kids,” Rachel said, and recalled what she said is one of her favorite memories of the trip. As they were visiting a school, Rachel and Rich entered one classroom and the children immediately began singing: “The Lord is calling you. You are welcome to lead us all into His kingdom.”

The song “touched our hearts deeply,” she said, explaining that throughout the entire month “we experienced the joy of the Gospel in a fresh and new way. The faith of the people is vibrant; God is their treasure.”

While the basic needs of those living in the camps are many, Rachel said that spiritually speaking, “the greatest need we found was the need to be heard.”

“Pope Francis speaks about a ministry of listening, and this concept came alive for us while we were in the refugee camps,” she said, explaining that when they eventually return to Uganda, they plan to help with spiritual formation, since general catechesis and sacramental preparation are often lacking.

As the month drew to a close, Rachel said she, her husband and Bishop Odoki all experienced an “overwhelming confirmation” that God was inviting the couple to serve there as full time lay missionaries and live as spiritual parents to the many children and orphans in need.

So while they already see Uganda as their new home, Rachel and Rich headed back to the United States to get things in order. But the story doesn't end there.

Just three days after returning to the U.S., Rich got a phone call from a lawyer who helps facilitate private adoption, saying a woman had selected him and Rachel to adopt her baby.

“The phone call came out of left field, when we least expected it! Truly, it was wild,” Rachel said.

Rich and Rachel had been in touch with the lawyer several years before, but hadn't spoken to her since.

However, she had saved their profile, and as the mother was looking through the stack of possible adoptive parents for her unborn child, she was “moved” when she saw Rachel and Rich's profile and wanted to know more about them.

According to Rachel, when it was explained to the mother that the couple were missionaries living in Uganda, “it struck a deep chord,” as the woman herself was an orphan who had been adopted from Guatemala.

The mother had initially scheduled an abortion during the time that Rachel and Rich were in Uganda, but decided against it and reached out to a crisis pregnancy center. When she heard about Rachel and Rich, she wanted her unborn daughter to be with them, as she had fond memories of the Catholic nuns who raised her until she was adopted.

“We always felt open to adoption, but trusted that God would make it happen in His time,” Rachel said. “It’s a blessing to have received this unbelievable gift when we least expected it; God’s fingerprints are all over it.”

Both Rachel and Rich were present when their daughter was born. “We wept tears of joy and continue to do so. She has taken our breath away,” Rachel said, adding, “truly, God has turned our mourning into dancing!”

Once the adoption is finalized and little Chiara Maria gets her passport, Rachel and Rich will return to Uganda with their new daughter and continue to serve as lay missionaries in the Arua diocese under the guidance of Bishop Odoki.

While they will wait for Odoki to give them instructions when they arrive, Rachel said she believes they will travel to the refugee settlements in order to provide catechesis, sacramental preparation and trauma counseling.

Rachel, who graduated from the Franciscan University of Steubenville in Ohio, holds degrees in theology and religious education, while Rich holds a graduate degree in theology.

Overall, Rachel said she sees their role as a “funnel of resources” from the U.S. to help this particular group and to raise awareness and funds to address the current humanitarian crisis in the area, which is “one of the most serious in the world right now.”

Pope Francis himself recently put a spotlight on the crisis by declaring Feb. 23, the Friday of the first full week of Lent, as a day of prayer and fasting for the DRC, South Sudan and Syria, all three of which have been ravaged by internal conflict for years.

Though they can cease being missionaries at any time, Rachel said she and Rich feel that their call to be missionaries is a “lifelong vocation,” and don't see themselves leaving it.

“That is where Jesus is,” she said, adding, “we cannot wait to return and see see how the Lord will work.”