Vatican
News
The women in the Gospel
Today's meditation in the spiritual exercises of the Pope. 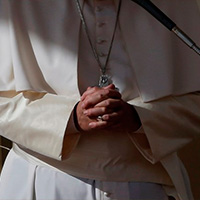 tradWomen, with their faith, open the Gospels to us….

According to Vatican News, during the Pope and Roman Curia’s spiritual exercises, Fr. José Tolentino Mendonça, who is leading the meditations, stressed this as he put the beauty of women’s faith at the forefront of today’s morning meditation.

Meditations this year have been entrusted by the Pope to Portuguese priest and Biblical theologian, Father José Tolentino de Mendonça, vice-rector of the Portuguese Catholic University in Lisbon, who is leading the meditations on the theme: “Praise of Thirst.”

In this morning’s reflection, the protagonists were the women throughout Luke’s Gospel.

“The women in the Gospel,” he stressed, “prefer to express themselves with gestures. Their faith seeks comfort through touch—tangible, emotional, disarming–rather than through abstraction.”

Recognizing that the way women accompanied the Lord was different than how the men did, he explained, “The women ‘were with’ Jesus exactly in the same way as the Twelve. They made his destiny their own destiny. But the text adds one thing regarding only them: “they were serving Jesus.”

Suggesting that the women’s reaction is deeply evangelical, Fr. Tolentino observed that they never ask Jesus the questions that the disciples ask Him such as “Lord, will only a few people be saved” (Luke 13:23)? Or “Lord, what must I do to inherit eternal life (Luke 10:25)?

Rather, he noted, their declarations are concrete such as, “Blessed is the womb that carried you and the breasts at which you nursed” (Luke 11:27).

With women, he said, there is a “ripple of reality that intervenes in order to shape faith. In this way it does not remain a prisoner—as often happens to our faith—rationalistic, lived mechanically according to doctrine or ritual.” It is because they are in touch with daily life that they give “perfume to the faith.”

The priest also recognized that the women in Luke’s Gospel, such as the women of Jerusalem or the widow of Naim, the “sinner,” cry. St Gregory Nanzianzen, he said, describes these tears as a baptism—which many other saints have experienced.

Concluding his meditation with the image of the woman washing Jesus’ feet with her tears, he noted: “What this woman gave thus “serves Jesus as the litmus text for what the Pharisee refused to give.”

“It is this unheard-of hospitality which Jesus wants to praise—that thirst, expressed in tears—which is our turn to learn.”

Whereas on Tuesday afternoon, the Portuguese priest reflected on a verse from John’s Gospel: “After this, aware that everything was now finished, in order that the scripture might be fulfilled, Jesus said, ‘I thirst’ ” (John 19:28).

There are other occurrences in John’s Gospel that help us understand Jesus’ words: 1) When Jesus is thirsty and asks the Samaritan woman for a drink (John 4:13-15); 2) The declaration “whoever believes in me will never thirst” (John 6:35).

“In an almost physical way she felt Jesus’ thirst calling her to give her life in service to the thirst of the poor and rejected, to the poorest of the poor.”

Sunday afternoon, Feb. 18, 2018, Pope Francis departed the Vatican to participate in his annual Lenten Spiritual Exercises at Casa ‘Gesù Divin Maestro’ (the Divine Master House) in the town of Ariccia near Rome. For a week, the Holy Father will remain there praying with members of the Roman Curia. The retreat will conclude on the morning of Friday, Feb. 23. Until then, all of the Pope’s activities, including the weekly General Audience, Feb. 21, are suspended.

Originally, the Spiritual Exercises took place in the Vatican, but Pope Francis moved them to the retreat house, 16 miles outside of Rome.