Daily Gospel
Liturgical Cycle B
A Madman for Christ
Mark 5:1-20 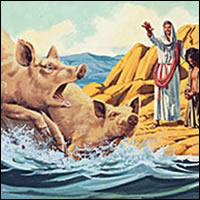 Introductory Prayer: Father in heaven, my heart is hungry for your word. I believe that you want to speak a word of hope to me today. How good it would be if I were to see myself and my future as you do, but at least I do trust in you. I wish to take up your challenge to be holy, whatever the cost, and I am confident that you will accompany me closely and help me with your grace.

Petition: Lord Jesus, help me to abandon myself to your healing power.

1. A Hopeless Situation? The man possessed by a legion of demons seemed to the people around—and perhaps to himself—a hopeless case. Living there alone amidst the tombs, he could not help but harm himself, gashing himself against stones. Nobody could help him by restraining him. In our lives with God, some seemingly unsolvable situation may exist, perhaps some sinful state we got ourselves into, but from which we cannot seem to extract ourselves. Or we experience that we are always falling into the same sins, the same biting impatience, the same laziness, the same sensuality. Friends and family seek to help us, but we don’t have the will to change. Instead of rectifying the situation, we just make a pact with a kind of modus vivendi, saying to ourselves, “We can only live as best as we can.” But the result is that that one demon has multiplied in me and become a legion of demons.

2. Jesus Has Power: Jesus encounters the possessed man. The scene is intriguing: the man runs to prostrate himself before Christ, while at the same time the demons show fear and beg Jesus not to be harsh with them. How consoling to know that no situation can escape Christ’s power to straighten it out. It is also consoling to know that Jesus wants to free us from the power of the devil, from any sinful state in which we find ourselves. We can always turn to Christ to ask to be healed because no one is ever so sinful or so possessed to be totally repugnant to God’s love. Certainly, we may fear that Christ’s medicine may hurt, but we need to trust that the spiritual “treatment” is worth it. The treatment may be an honest and thorough confession, a brutally sincere self-examination, or the breaking-up of an unhealthy relationship.