Vatican
Documents
Admit your wounds and receive mercy.
How good it is for all of us to let Jesus renew our hearts. 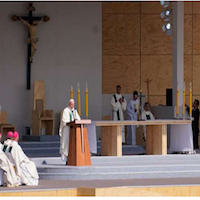 Pope Francis said Tuesday that even amid the pain which results from sinfulness, the Church can still serve the world if she acknowledges the reality of her woundedness and puts Christ and his mercy at the center of all things.

"We are not asked to ignore or hide our wounds. A Church with wounds can understand the wounds of today's world and make them her own, suffering with them, accompanying them and seeking to heal them," the Pope said Jan. 16 at the Santiago Metropolitan Cathedral in Santiago, Chile.

"A wounded Church does not make herself the center of things, does not believe that she is perfect, but puts at the center the one who can heal those wounds, whose name is Jesus Christ."

Pope Francis spoke during an encounter with priests, deacons, religious men and women, consecrated, and seminarians, where he was welcomed by Cardinal Ricardo Ezzati Andrello of Santiago.  The meeting took place as part of the Pope's Jan. 15-22 apostolic visit to Chile and Peru.

Cardinal Ezzati reflected that “presbyteral and consecrated life in Chile have and do endure difficult times of turbulence,” and that while many have been faithful, “the weeds of evil have also grown, and their consequence of scandal and desertion.” He thanked Pope Francis for “your words which denounce sin and lukewarmness and, at the same time, your continuous calls to live the beauty of the election and the apostolic dedication of the consecrated vocation.”

Pope Francis said that it doesn't help to try to hide wounds and sins: "whether we like it or not, we are called to face reality as it is – our own personal reality and the reality of our communities and societies."

Even St. Peter had to acknowledge that he "was a sinner like everyone else, as needy as the others, as frail as anyone else,” Francis emphasized. “As disciples, as a Church, we can have the same experience: there are moments when we have to face not our success but our weakness.”

What made St. Peter an apostle? What makes us apostles? he asked. One thing alone: that we have received the mercy of Christ.

Francis outlined three moments in the Gospels where we can learn from St. Peter, even as imperfect and sinful people, to bring Christ to the world. These three moments the Pope called Peter disheartened, Peter shown mercy, and Peter transfigured.

Before the resurrection, but following Christ's passion, St. Peter and the other apostles were “dismayed and confused,” Francis said. “These are the hours of dismay and confusion in the life of the disciple,” he said.

He pointed to the child sexual abuse scandal that has occurred within Chile as a "time of upheaval," saying he is attentive to what priests, consecrated, and religious are doing "to respond to this great and painful evil."

It is particularly painful, he said, "because of the harm and sufferings of the victims and their families, who saw the trust they had placed in the Church’s ministers betrayed. Painful too for the suffering of ecclesial communities, but also painful for you, brothers and sisters, who, after working so hard, have seen the harm that has led to suspicion and questioning; in some or many of you this has been a source of doubt, fear or a lack of confidence.”

"I know that at times you have been insulted in the metro or walking on the street, and that by going around in clerical attire in many places you pay a heavy price. For this reason, I suggest that we ask God to grant us the clear-sightedness to call reality by its name, the strength to seek forgiveness and the ability to listen to what he tells us,” he stated.

The Church in both Chile and Peru has faced major fallout from sexual abuse scandals in recent years, which have damaged the Church’s image and created a strong distrust of the hierarchy.

The major case in Chile is that of Fr. Fernando Karadima, who once led a lay movement from his parish in El Bosque. He was found guilty of sexually abusing minors in 2011 by the Congregation for the Doctrine of the Faith.

He then addressed the changes Chilean society has seen since his youth: “New and different cultural expressions are being born which do not fit into our familiar patterns.”

“We can yield to the temptation of becoming closed, isolating ourselves and defending our ways of seeing things, which then turn out as nothing more than fine monologues,” he said. “We can be tempted to think that everything is wrong, and in place of 'good news', the only thing we profess is apathy and disappointment. As a result, we shut our eyes to the pastoral challenges, thinking that the Spirit has nothing to say about them. In this way, we forget that the Gospel is a journey of conversion, not just for 'others' but for ourselves as well.”

The Pope stated, “Whether we like it or not, we are called to face reality as it is – our own personal reality and the reality of our communities and societies.”

Turning to “Peter shown mercy,” he discussed St. Peter's encounter with the risen Christ: “It is time for Peter to have to confront a part of himself. The part of him that many times he didn’t want to see. He experienced his limitation, his frailty and his sinfulness. Peter, the temperamental, impulsive leader and saviour, self-sufficient and over-confident in himself and in his possibilities, had to acknowledge his weakness and sin. He was a sinner like everyone else, as needy as the others, as frail as anyone else … It is a crucial moment in Peter’s life.”

“As disciples, as Church, we can have the same experience: there are moments when we have to face not our success but our weakness,” the Pope said.

When Christ takes St. Peter aside to ask him, “Simon, son of John, do you love me more than these?” he is trying to save him, the Pope said, “from the danger of remaining closed in on his sin, constantly dwelling with remorse on his frailty, the danger of giving up.”

Christ wants to free St. Peter “from seeing his opponents as enemies and being upset by opposition and criticism. He wants to free him from being downcast and, above all, negative. By his question, Jesus asks Peter to listen to his heart and to learn how to discern.”

The Lord “questioned Peter about love and kept asking until Peter could give him a realistic response: 'Lord, you know everything; you know that I love you'. In this way, Jesus confirms him in his mission.”

The reception of mercy is what confirmed St. Peter as an apostle, Pope Francis said. “We are not superheroes who stoop down from the heights to encounter mere mortals. Rather, we are sent as men and women conscious of having been forgiven. That is the source of our joy … A consecrated man or woman sees his or her wounds as signs of the resurrection; who sees in the wounds of this world the power of the resurrection; who, like Jesus, does not meet his brothers and sisters with reproach and condemnation,” he said.

Reflecting on how the risen Christ appeared with his wounds, which indeed “enabled Thomas to profess his faith,” the Pope said, “We are not asked to ignore or hide our wounds. A Church with wounds can understand the wounds of today’s world and make them her own, suffering with them, accompanying them and seeking to heal them. A wounded Church does not make herself the centre of things, does not believe that she is perfect, but puts at the centre the one who can heal those wounds, whose name is Jesus Christ.”

“The knowledge that we are wounded sets us free. Yes, it sets us free from becoming self-referential and thinking ourselves superior” and from a “promethean tendency,” he stated.

“In Jesus, our wounds are risen. They inspire solidarity; they help us to tear down the walls that enclose us in elitism and they impel us to build bridges and to encounter all those yearning for that merciful love which Christ alone can give.”

Pope Francis reflected: “I am concerned when I see communities more worried about their image, about occupying spaces, about appearances and publicity, than about going out to touch the suffering of our faithful people.”

He then quoted the words of St. Alberto Hurtado, a Chilean Jesuit of the mid-20th century who was involved in Catholic Action: “All those methods will fail that are imposed by uniformity, that try to bring us to God by making us forget about our brothers and sisters, that make us close our eyes to the universe rather than teaching us to open them and raise all things to the Creator of all, that make us selfish and close us in on ourselves.”

The Pope explained that “God’s people neither expect nor need us to be superheroes. They expect pastors, consecrated persons, who know what it is to be compassionate, who can give a helping hand, who can spend time with those who have fallen and, like Jesus, help them to break out of that endless remorse that poisons the soul.”

St. Peter experienced the “wound of sin” but “learned from Jesus that his wounds could be a path of resurrection.”

“To renew prophecy is to renew our commitment not to expect an ideal world, an ideal community, or an ideal disciple in order to be able to live and evangelize, but rather to make it possible for every disheartened person to encounter Jesus,” he said. “One does not love ideal situations or ideal communities; one loves persons.”

A “frank, sorrowful and prayerful recognition of our limitations” makes us able to return to Christ, Pope Francis said.

“How good it is for all of us to let Jesus renew our hearts.”