Dating & Engaged
Relationships
4 Movies That Teach Us The Definition of Love
The movies are such beautiful representations of what being human is all about. 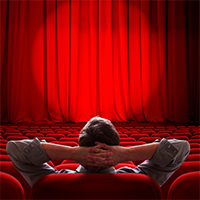 When people ask me, “Why do you love movies so much?”, I answer the same way every time. A film is created through the eyes of people. Meaning all the emotions in life, with its many trials and misfortunes, are portrayed by artists who have felt much of what we have felt in one way or another. We are all unique yet we all understand what it is to feel. That is why movies are such beautiful representations of what being human is all about.

The Ancient Greeks had four defined terms for Love: Philia, the love between friends; Storge, the love and affection between family members; Eros, romantic and sexual love; and Agape, the unconditional love of God for humanity.

4 Movies That Teach Us The Definition of Love

In my opinion this is the most underrated film to ever be released in the history of cinema – I cannot give it enough recognition. The plot follows an unrecognized genius, Will Hunting, (Matt Damon) as he struggles to cope with the past while navigating the present, which eventually leads him to seeking therapy. Will and his therapist, Sean Maguire,  (Robin Williams) are complete opposites, but they eventually  grow and learn from each other. They develop a great love and friendship which is more than merely an understanding that they need one another – together, they guide each other to a better place. (Strong language in the clip.)

The core of this film is the friendship between a band of toys who come in all shapes, sizes, and personalities. It shows that we never know where we may find friendship, which is the beauty of this marvellous film. In life we come across many people who we consider to be friends. Some stay with us while others may move on, but the memories always remain. Each friend leaves their mark on you and plays a part in shaping your character. A friend’s impact on who you are can be one of life’s greatest joys, and you never know where you will find it. That is the message of Toy Story – in spite of our differences, we can still be friend

This movie is the heartbeat which kick started a series of independent romantic films that have gone on to mainstream success. Starring Jim Carrey and Kate Winslet, the premise for this beautifully orchestrated piece is an estranged couple who have literally erased each other from their memories – and memory is where the majority of the film is set. At the center of this story is the idea that love is not easy and that we cannot simply erase our feelings; in order to achieve true happiness it takes courage, strength and a lot of hard work. The film is a powerful reminder to cling to the memories that make it all worth the effort to love. This is a movie that everyone should see at some point.  The acting is superb and all the credit goes to Charlie Kauffman who wrote this incredible screenplay about the difficulties of love.

Upon release in 2006 many were skeptical of this film, and you may be too.

Why is this sports drama a part of a list on defining love through cinema? I don’t blame you for asking, but let me explain. Upon release of the sixth installment in the dying Rocky franchise, audiences were left stunned and critics backtracking. What many believed would be yet another anticlimactic film made purely for box-office revenue turned into a compelling story between parent and child. The reason Rocky Balboa falls under Agape is due to its visual representation of  God’s love for us. For many, having a relationship with God can be challenging at times. Life gives us all sorts of obstacles to overcome, and if we’re not careful we can become emotionally distant from ourselves and our loved ones. Emotional distance can cause us to hate, which eats away at our potential. And often during tough times, what we fail to realize is that we are never alone. God is walking with us all the way through life. The wonderful aspect of this film is that it truly highlights the difficulties we all face in life as well as our relationship with God. The scene in the clip is a moving moment between a father and his child – He is always there to hold us when we fall and to lift us up when we need to rise.