Youth
An Existential Question in Cyberspace
What is life? 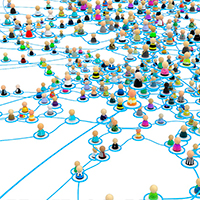 The other day I encountered a question which couldn’t be ignored. I usually don’t answer in Quora but this time something inside me made me write an answer. Here’s the question and my answer underneath.

Q: I feel like I’m searching for something that I do not know, like there’s a missing part in my life. I’ve gotten bored with all the parties and traveling. I kinda lost my passion. I have everything I need, but I am still unsatisfied. What should I do?

A: This is the question all young people should be asking themselves. It’s not just about the meaning in life, it’s about life itself. What is life? The Cambridge dictionary defines it as, “the period between birth and death, or the experience or state of being alive.” The second part is an incorrect definition because it contains a word that comes directly from the root of the defining word (or the word that is meant to be defined). And the first part isn’t totally helpful because we could then conclude that life is just time. But life has to be more than time. Time is an aspect of life, a necessary aspect. Like oxygen is for breathing.

Now, I believe life is a gift. Yes, a gift from God. God created us and loves us. We come from God and are made for him. Like Saint Augustine says, “You have made us for yourself, O Lord, and our heart is restless until it rests in you.”We all have this inner thirst for God. Feuerbach says we made it up, Freud thinks we made it up because of psychological problems, Marx thinks we make it up because we’re poor. But in the end nothing else satisfies us because we aren’t made for anything else! It’s like if I make a pen that should be used to write but instead I use it to stop the door from closing. It’s not doing, it’s not being what it mas meant to be: a pen!

The most important thing in life isn’t to be happy. Because the next question would be, “well, and how do I become happy?” Suppose they answer: “eating cookies”. Well, then the most important thing in life is to eat cookies (something concrete) and that as a consequence will make me happy. That’s why happiness doesn’t have the last word. It’s God. God is the answer to your question. I’ve given my life to Him and believe me I’m really happy! It’s not parties and satisfactions what makes us happy because we aren’t made for that. These things only give us momentary joys or satisfactions. We’re made for something much greater and bigger. Don’t forget this.And nowadays, people seem to have solved the “God problem” saying we don’t need him or He doesn’t even exist. So they try to distract themselves from this thirst they have by parties, friends, alcohol, drugs: in the end they try to distract themselves (by every time going with something “even better, even hotter, even more extreme…”) from the question that you made here on Quora.

Anyway. This is my first answer in Quora because I think it’s something worth answering, something I’ve given my life for: so that others may live…