Vatican
The World Needs Stable Families
The stability of the Family is integral for the future. 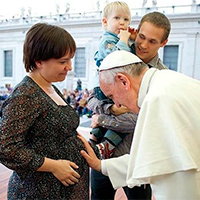 In a speech to diplomats on Monday, Pope Francis said that the stability of the family is integral for the future, and that such stability is created when founded upon the faithful and lasting relationship of a man and woman.

“Today fleeting relationships are preferred to the stability of a definitive life project. But a house built on the sand of frail and fickle relationships cannot stand,” the Pope said Jan. 8.

“What is needed instead is a rock on which to build solid foundations. And this rock is precisely that faithful and indissoluble communion of love that joins man and woman, a communion that has an austere and simple beauty, a sacred and inviolable character and a natural role in the social order.”

Therefore, it is urgent, he continued, that government policies support the family, on which “the future and the development of states depend,” and without which future challenges cannot be met.

Pope Francis’ words were addressed to ambassadors and other members of the Diplomatic Corp in a message for the start of the new year.

Currently, the Holy See has diplomatic relations with 183 states, as well as the European Union and the Sovereign Military Order of Malta, after having established diplomatic ties with Burma – also known as the Republic of the Union of Myanmar – in May 2017.

Of these, 89 states maintain embassies to the Holy See in Rome, including the Embassy of South Africa, which was established last year.

In his lengthy speech, which centered on human rights, Pope Francis not only emphasized the importance of the family, but also the right to life, beginning in the womb.

Seventy years after the creation of the United Nations’ Universal Declaration of Human Rights, it’s painful to see the many ways the fundamental rights of human beings continue to be violated, he said.

The first among these is the right of every human person to “life, liberty and personal security,” he noted, which are not only frequently destroyed by war and violence, but by even more “subtle means,” such as abortion.

“I think primarily of innocent children discarded even before they are born, unwanted at times simply because they are ill or malformed, or as a result of the selfishness of adults,” the Pope stated.

This disregard for life and the family has had an immense effect; particularly in those parts of the world experiencing a decline in birth rate, which has led to a true “demographic winter!” he underlined.

The Pope also pointed to the waning birth rate as a sign of societies which are struggling to face present challenges, growing even more fearful of the future.

Discussing the importance of the right to life, Francis also drew attention to the maltreatment of the elderly, who are often seen as a burden, and of women, who repeatedly suffer from violence and oppression.

Defending the right to life also includes “safeguarding the right to health on the part of individuals and families,” he said, as well as “actively striving for peace, universally recognized as one of the supreme values to be sought and defended.”

In light of this, Francis made note of places which are experiencing difficult moments and in need of special attention, including the Korean peninsula, Syria, Jordan, Turkey, Lebanon, Iraq, Yemen, Afghanistan, Israel, Palestine, and Ukraine.

He also drew attention to the situation in Venezuela, and the violence in many parts of Africa, especially South Sudan, the Democratic Republic of the Congo, Somalia, Nigeria and the Central African Republic.

Relations between nations, like all human relationships, “must likewise be harmonized in accordance with the dictates of truth, justice, willing cooperation, and freedom,” Francis stated, quoting from the Universal Declaration of Human Rights.

“The basic premise of this approach,” he said, “is the recognition of the dignity of the human person.” It is a disregard and contempt for that dignity, he continued, which has resulted in “barbarous acts that have outraged the conscience of mankind.”