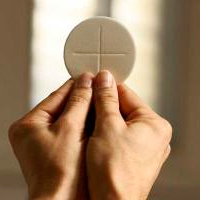 On a Saturday morning this past July, the Congregation for Divine Worship and the Discipline of the Sacraments issued a circular letter to bishops reiterating existing norms regarding the matter of the Eucharist, including the norm that Communion hosts must contain some amount of gluten to be valid matter for consecration.

By that night, the (misconstrued) news had spread like wildfire: “Catholic Church bans celiacs from Communion!” many media outlets declared. It was such a hot topic that Twitter declared it a “moment” in world news.

But these were existing norms - there was no change, no announcement of new norms, nor banning of celiacs from the Sacrament of the Eucharist. Gluten-free hosts have always been invalid matter for the sacrifice of the Mass, meaning that Catholics with celiac disease have already grappled with other options for Communion.

Usually, such “reminder” letters are issued when someone, generally a bishop, has raised a question or has been alerted of a possible abuse of the norm.

Why must a Communion host contain at least some gluten?

Wheat bread and wine of the grape are the matter of the sacrament of the Eucharist because Christ instituted the sacrament under these species. Moreover, Christ compared himself to a grain of wheat, and to the vine.

At some point along the line the question of gluten came arose, and whether the bread used for Holy Communion necessitated at least some gluten (and its accompanying protein gliadin) to be considered wheat bread that was valid matter for the sacrament.

A July 2003 circular letter from the Congregation for the Doctrine of the Faith, noting documents from the 1980s and '90s, recalled that “Hosts that are completely gluten-free are invalid matter for the celebration of the Eucharist.”

It added that “Low-gluten hosts (partially gluten-free) are valid matter, provided they contain a sufficient amount of gluten to obtain the confection of bread without the addition of foreign materials and without the use of procedures that would alter the nature of bread.”

And in 2004 the Congregation for Divine Worship wrote in its instruction Redemptionis Sacramentum that “The bread used in the celebration of the Most Holy Eucharistic Sacrifice must be unleavened, purely of wheat, and recently made so that there is no danger of decomposition. It follows therefore that bread made from another substance, even if it is grain, or if it is mixed with another substance different from wheat to such an extent that it would not commonly be considered wheat bread, does not constitute valid matter for confecting the Sacrifice and the Eucharistic Sacrament.”

That said, the Church recognizes that it mustn't exclude from receiving Communion Catholics with celiac disease, and has made accommodation for those who are unable to consume normal bread.

Options celiacs have for Communion: Advice from a priest with celiac disease

A layperson affected by celiac disease who is unable to receive even a low-gluten host may receive Communion under the species of wine only.

A priest in a similar situation, when taking part in a concelebration, may with permission of the Ordinary receive Communion under the species of wine only. But such a priest may not celebrate the Eucharist individually, nor may he preside at a concelebration.

Father Joseph Faulkner, a priest of the diocese of Lincoln, was diagnosed with celiac disease in 2008.

Already a priest, he had to receive special permission from his diocese to use low-gluten hosts in order to celebrate the Sacrifice of the Mass.

Fr. Faulkner told CNA he was surprised that the letter regarding communion norms exploded so quickly on Twitter, but he saw it as a teachable moment.

The problem of gluten is especially pressing for priests, who must consume Communion under both species at a Mass which they celebrate individually.

For Father Faulkner, he has found that the best low-gluten hosts are made by the Benedictine Sisters of Perpetual Adoration in Clyde, Missouri. The sister’s website includes a page about proper storage and distribution of low-gluten hosts so as to avoid cross-contamination.

While the hosts are not low-gluten enough to be considered gluten free (which is understood to be less than 20 parts per million), they are low enough to be approved by the Celiac Support Association, which has some of the most stringent guidelines available on what celiacs can safely consume, Father said.

“I throw up if I eat bread, but I consume 8-9 large, low gluten hosts per week, and have done that for 9 years, and I don’t get sick from them,” he told CNA.

Father Faulkner said he recommended that any celiac wary of the low-gluten hosts obtain a few of them, unconsecrated, and try tiny particles to see if they are able to safely consume them.

For celiacs who are unable to receive these low-gluten hosts, Fr. Faulkner said “the safest and most certain thing a person could do would be to ask to receive (the Precious Blood) from a chalice other than the chalice that the priest uses.”

That’s because the chalice of wine that the priest uses contains the frumentum - the little bit of Host dropped in during the Angus Dei. To avoid any cross-contamination, a separate chalice is necessary.

“That’s the most certain way, and when you receive the Precious Blood, you receive Jesus’ body, blood, soul and divinity, so you don’t have to worry” about only receiving part of the sacrifice, he said.

For those who are able to receive the low gluten hosts, travelling with a sleeve of unconsecrated hosts can be a way to ensure that they can receive Communion in different parishes, Fr. Faulkner said.

“Just go up to the pastor and explain, ‘Hi, I’m a celiac, can I have one of these hosts consecrated on a separate paten?’” he said. “Because parishes want to be accommodating, but if they don’t have a celiac in their parish they’re probably not going to stock (low-gluten hosts) in their fridge.”

The lay Catholic experience: What it’s like finding gluten-free Communion

Michelle De Groot is a layperson with celiac disease in the Diocese of Arlington. She said that for a long time, she would approach priests in the sacristy before Mass to ask them to consecrate a separate chalice of wine, so that she could safely receive without cross-contamination.

“That was always kind of stressful because sometimes the priest would understand what I was talking about and sometimes not. And they didn't always have a second chalice handy,” De Groot told CNA.

Then, De Groot found out about the low-gluten altar breads made by the Benedictine Sisters. After doing her research, she decided to try these hosts, since they are approved as celiac-safe.

“I've never had any symptoms,” she said. De Groot says she also travels with her own supply of low-gluten hosts and a pyx (a small, round container for hosts) that allow her to receive Communion at parishes that may otherwise be unprepared.

She said while her celiac diagnosis was an emotional one for her at first, it has allowed her to establish relationships with priests and Eucharistic ministers at her parish and other churches she frequents.

“At my home (parish), it's even not the end of the world if i'm running a few minutes late because they know me and my needs - whereas when I was first diagnosed, I had to get to church 15 minutes ahead to give time for the awkward explanations,” she said.

“If anything, celiac has been good for me in terms of my relationship to my parishes - I'm not an isolated stranger there, I'm known!”

Molly O’Connor is also a Catholic with celiac disease, who expressed similar frustrations with trying to make sure the Communion she received was both valid and safe. Having lived in six local Churches throughout the country, she said experiences varied widely from parish to parish.

“I typically just receive the cup at Communion, and I try both to sit in a part of the church where Communion is distributed by a priest so I may receive a blessing and near a cup that doesn't have part of the host in it. If that sounds complicated, it is!” she said.

Travelling can be difficult, she said, as it can be hard to know whom to approach about receiving Communion. Parishes also often don’t announce whether they have low-gluten hosts, or how low-gluten they are, and not all parishes are conscious about cross-contamination, she said.

The U.S. Bishops issued a letter in 2012, updated in April 2016, regarding low-gluten and gluten-free communion options, as well as guidelines to avoid cross-contamination that can be found here.

O’Connor said the best situations have been when priests consecrate a separate chalice for her, and when parishes announce specifics about low-gluten or gluten-free options.

“As the Eucharist is the source and summit of our Catholic faith, I think making Communion accessible to celiac and gluten-sensitive Catholics, in a manner consistent with Vatican and the U.S. Bishop’s norms, is paramount,” she said.

“How diminished is our faith life if we are unable to share in the paschal mystery with our fellow Catholics?”