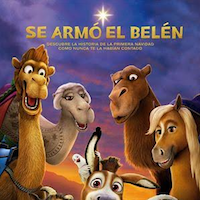 “Oddly enough, there has never been an actual Nativity Story movie at Christmas time, which is crazy, because it's been around for 2,000 years and the movies have been around for a hundred and some years. It's about time.”

“The Nativity Story has been told so many times, that it is difficult to reimagine it in a new light. I think with 'The Star' doing it as an animation, with the perspective of the animals, with this lighthearted joy surrounding it, kind of alleviates the weight of the original story so that the youth can relate to it in a way that I think sometimes can be difficult.”

While the film definitely plays on the quirkiness of the animals, it does not lack the depth and seriousness that this time of year brings.

“Really the vulnerable moments, the human moments of Joseph were the ones I treasured the most. I remember voicing them and really even starting to cry, to get teary in the actual voice-over session because I really wanted to, you know, I could feel it. I felt the rawness and the vulnerability of those moments and I'm just really grateful that we got to capture that.”

The film features stars such as Kelly Clarkson, Oprah Winfrey, Tyler Perry, and Tracy Morgan who all have joined forces to create this movie to highlight the greatest story ever told.