Marian Devotion
All about Mary
A crash course in Miracles 101
Exploring the Moraculous is a book which includes common questions about the importance of miracles. 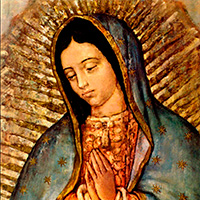 What do a grilled cheese sandwich and the tilma of Our Lady of Guadalupe have in common?

Both bore what appeared to be images of Mary. One was determined to be authentically miraculous, the other was not. Not to spoil any secrets, but it’s not  “Our Lady of the Grilled Cheese” that converted Mexico and continues to draw millions of people on pilgrimage every year.

But have you ever wondered just how the Church determines the bogus from the divinely appointed?

In his book, “Exploring the Miraculous,” Michael O’Neill gives readers a crash course of sorts in “Miracles 101” - including common questions about the importance of miracles, an explanation of the approval process, and descriptions of the various types of miracles found within the Catholic Church.

“This is a very rare book in that it tries to cover the entire spectrum of miracles within the Catholic Church,” O’Neill told CNA.

Catholics by definition are people who have to believe in at least two miracles, O’Neill said - that of Christ’s incarnation and his resurrection, two pillars on which the Catholic faith rests.

For modern-day miracles, belief is never required of the faithful. The highest recognition that the Church gives to an alleged miracle is that it is “worthy of belief.” Investigations of reported miraculous events – which include extensive fact-finding, psychological examination and theological evaluation – may result in a rejection if the event is determined to be fraudulent or lacking in super natural character.

Or the Church may take a middle road, declaring that there is nothing contrary to the faith in a supposed apparition, without making a determination on whether a supernatural character is present.

But while official investigations can take years, the mere report of a miracle can bring Catholics from long distances, hoping to see some glimpse of the divine reaching into the human.

And it’s not just the faithful who find miracles fascinating.

“It's important for atheists and skeptics, those people who don’t believe, they’ve got to have an explanation for the inexplicable,” he said. “There’s something for everyone.”

The universal nature of the experience of the miraculous is also what draws people from all belief spectrums to these stories, O’Neill added.

“We all pray for miracles of one sort or another. They can be these really sort of small things like praying for an impossible comeback in a football game, or it can be a lost wallet or wedding ring,” he said.

“But they can also be these really big things, such as our loved ones, they fall away from the faith and we want them to return, or somebody from our friends or our family is very sick and we desperately implore God’s help for them. It’s something that everybody experiences.”

O’Neills own fascination with miracles started in college, when for an archeology assignment he studied the miraculous tilma of Our Lady of Guadalupe, a Marian apparition to which he’d inherited his mother’s devotion. He had heard stories about miracles associated with the image, both from within his own family and from the larger Church, and he wondered how much truth there was to the tales.

He also started learning about the larger tradition of miracles within the Church, and was struck by how the Church has carefully investigated thousands of claims over the years, only to select certain ones that it eventually deems as of divine origin.

“I thought that was fascinating that the Church would stick its neck out and say these things are worthy of belief,” he said.

Although he continued his engineering studies throughout college, a piece of advice at graduation from Condoleezza Rice, who was serving as vice provost at Stanford University at the time, stayed with him.

“She asked what we were going to do after graduation, and her advice was to become an expert in something,” he said.

“And I thought about what would be a great thing to study? My mind went back to all those hours I’d spent in the library and my promise to return to it someday and I said you know what? I want to be the expert on miracles.”

For a while he kept his studies private - he didn’t want to be seen as the guy who was obsessed with weird things like Bigfoot or the Loch Ness Monster. But eventually, he realized that many people were interested in miracles and found them helpful for their own faith.

“It’s a way that people feel connected to God, they know that God is a loving father watching out for them, so it’s one of those things - a miracle is a universal touchstone,” he said.

“No matter how strong we think our faith is or want it to be, we always want to know that God is there for us, and miracles are that sort of element that bridges the gap between our faith and our connection with God.”

In his book, O’Neill provides descriptions and examples of every basic category of miracle within the Catholic Church, including healing miracles from saints in the canonization process, biblical miracles, apparitions, locutions (audible messages from God or a saint), miraculous images, Eucharistic miracles, incorrupt bodies (those that either partially or fully do not decompose after death), and stigmata (the wounds of Christ appearing on some living people).

The most popular kind of miracle, and O’Neill’s personal favorite, are Marian apparitions - when Mary appears in a supernatural and corporeal way to a member of the faithful, most often with a message.

There have been about 2,500 claims of Marian apparitions throughout history, and a major one that many people are currently curious about are the alleged apparitions happening at Medjugorje, about which the Church has yet to make a definitive decision of validity. Curiosity about Marian apparitions was also a large part of what spurred O’Neill to create his website, miraclehunter.com, where he files information about miracles in their respective categories and provides information on their origin story and whether or not they have been approved by the Vatican.

“The Vatican didn’t have a resource where you can find out what’s approved and what’s not, and what messages are good for our faith and what ones we should stay away from, so I tried to create a resource for the faithful for that,” he said. He’s now been running the website for more than 15 years.

O’Neill also loves Eucharistic miracles, because unlike several other types of miracles, whose validity are largely determined by faithful and reliable witnesses, science can be applied.

“They can check to see if it’s really human blood, and what type of blood, and in some cases you have heart muscle in these hosts that have turned into true flesh,” he said.

One of O’Neill’s favorite Eucharistic miracles occurred in Argentina while Pope Francis was still a bishop there.

It was August of 1996, and a priest in Buenos Aires, Fr. Alejandro Pezet, discovered a host in the back of his church, and so he took it and placed it in some water in the tabernacle to dissolve it. Over the next few days, days he kept an eye on it, and it grew increasingly red. The priest decided to present the case to Archbishop Jorge Bergoglio, who ordered that the host be professionally photographed and eventually examined by a scientist in the U.S., who was not told the origin of the specimen he was testing.

The tests showed the sample to be heart muscle with blood type AB, the same blood type found on the Shroud of Turin.

“The scientist was an atheist and he said, why did you send me this heart muscle, what was the point of this? And they said it was a consecrated host, and actually that atheist scientist converted to Catholicism as a result of that study,” O’Neill said.

O’Neill also notes in his book that when considering miracles, it’s important to not go to extremes.

“The question of the role of miracles in our life of faith is an important one and requires avoiding two extremes: an overemphasis and credulity regarding the supernatural on the one hand and a denial of the possibility of divine intervention and a diminishment of the role of popular devotion on the other,” he wrote. Either way, obedience to the magisterium of the Church and their teachings on particular miracles is key.

Miracles are an important asset for the faith because of their ability to connect people with God, either as first-time believers or as long-time faithful who need a reminder of God’s presence.

“I like to think of miracles as a great way to engage young people, to get them excited about the faith,” he said. “They shouldn’t be the centrality of anybody’s faith, but it’s a way to open the door for people...so I think miracles can play a huge role in evangelization.”