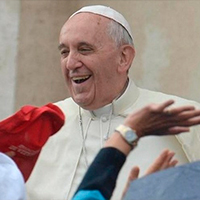 In a meeting with Buddhist monks in Burma on Wednesday, Pope Francis stressed that true and lasting justice and peace cannot be achieved unless the dignity of all people is protected.

“Authentic justice and lasting peace can only be achieved when they are guaranteed for all,” Pope Francis said Nov. 29.

He emphasized that his meeting with the Buddhist monks is an opportunity to strengthen the bonds of friendship between Catholics and Buddhists as well as “affirm a commitment to peace, respect for human dignity and justice for every man and woman.”

The meeting took place during the Pope’s Nov. 27-Dec. 2 apostolic trip to Burma – also known as Myanmar – and Bangladesh, which comes amid a serious uptick in state-supported violence against the Rohingya, a largely Muslim ethnic group who reside in Burma’s Rakhine State.

In recent months, the violence has reached staggering levels, causing the United Nations to declare the situation “a textbook example of ethnic cleansing.”

“In every age, humanity experiences injustices, moments of conflict and inequality among peoples. In our own day these difficulties seem to be especially pronounced,” the Pope said.

Even though we’ve made great technological advancements, and people around the world are more and more aware of “their common humanity and destiny,” he said, still “the wounds of conflict, poverty and oppression persist, and create new divisions.”

“In the face of these challenges, we must never grow resigned,” he continued, because our “respective spiritual traditions” show us the way forward, “a way that leads to healing, mutual understanding and respect. A way based on compassion and loving kindness.”

Burma's religious makeup is predominately Buddhist, with 89 percent of the population practicing the Theravada tradition of Buddhism. In the encounter, Pope Francis expressed his esteem for those who follow the Buddhist tradition in Burma, saying that through their religion, the people “have been formed in the values of patience, tolerance and respect for life.”

A great challenge of today, Francis said, is to help people be open to the “transcendent,” being able to know themselves in such a way as “to realize that we cannot be isolated from one another.”

But if we are to be united, we must work to overcome “all forms of misunderstanding, intolerance, prejudice and hatred,” he said, noting that the words of Buddha and St. Francis can offer a guide for how to go about doing this.

May the wisdom contained in these words, he said, continue to inspire patience and understanding, “to heal the wounds of conflict that through the years have divided people of different cultures, ethnicities and religious convictions.”

He stressed that overcoming conflict and injustice is not only the work of religious leaders, but of the whole of society, though it is a particular responsibility of religious and civil leaders to guarantee that everyone’s voice is heard.

Francis said that for this work to bear lasting fruit, religious leaders will need to work together in even greater collaboration, stating that in this, “the Catholic Church is a willing partner,” ready to continue to walk together the path of “peace and healing, compassion and hope.”

He also praised the two-day peace meeting held by the local Catholic bishops’ conference in April – which included leaders of different religious communities as well as ambassadors and representatives of non-governmental agencies – as “essential” for deepening understanding of one another.