Vatican
Peace isn't possible unless we go beyond polemics
New Jerusalem the city whose gates are open to people from all nationalities. 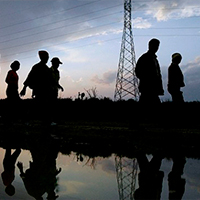 When it comes to migration, Pope Francis said the world, particularly Christians, must approach the issue with a “contemplative gaze” that goes beyond polemics and is guided by justice and solidarity, helping to build peace at both the global and local level.

Quoting St. John Paul II's message for the World Day of Peace in 2000, the Pope said, “we all belong to one family, migrants and the local populations that welcome them, and all have the same right to enjoy the goods of the earth whose destination is universal, as the social doctrine of the Church teaches.”

He referred to the biblical prophecies of Isaiah and the Apocalypse, which describe the “new Jerusalem” as a city whose gates are open to people from all nationalities. And in this city, “peace is the sovereign that guides it and justice the principle that governs coexistence within it.”

Christians must also have this “contemplative gaze,” he said, noting that when we look at migrants and refugees, we see that “they do not arrive empty-handed.” Rather, they bring with them their courage, skills, energy and aspirations, as well as the gift of their own culture, which enriches the lives of the nations that receive them.

Francis also pointed to the “creativity, tenacity and spirit of sacrifice” displayed by the many people, families and communities around who “open their doors and hearts to migrants and refugees, even where resources are scarce.”

A contemplative gaze on migration, he said, will also help guide global leaders in their discernment on the issue, and will encourage them to pursue policies of welcome “within the limits allowed by a correct understanding of the common good,” while at the same time keeping in mind the needs of both the whole of humanity and the good of the individual.

“Those who see things in this way will be able to recognize the seeds of peace that are already sprouting and nurture their growth,” the Pope said.

And with this gaze, “our cities, often divided and polarized by conflicts regarding the presence of migrants and refugees, will thus turn into workshops of peace.”

Pope Francis' reflection was part of his message for the 2018 World Day of Peace, which this year is titled “Migrants and Refugees: men and women in search of peace.” Signed on the Nov. 13 feast of St. Frances Xavier Cabrini, the message was published Nov. 24.

Instituted by Bl. Pope Paul VI in 1968, the World Day of Peace is celebrated each year on the first day of January. The Pope gives a special message for the occasion, which is sent to all foreign ministers around the world, and which also indicates the Holy See’s diplomatic tone during the coming year.

So far Pope Francis’ messages have focused on themes close to his heart, such as fraternity, an end to slavery, including forced labor and human trafficking and nonviolence as a political strategy.

His messages for the event have consistently included bold pastoral and political advice for both ecclesial and international leaders, including his push for the abolition of the death penalty and amnesty for prisoners convicted of political offenses.

This year's message focuses largely on the four-point “action plan” the Holy See has developed for the migration issue and which Pope Francis and his diplomatic representatives have spoken of often, particularly at the level of the U.N. This plan consists of four verbs: to welcome, protect, promote and integrate.

These are the four “milestones” for action, Francis said, explaining in his message that to welcome means above all broadening access to legal pathways for entry into host countries. Doing this, he said, will no longer push migrants and displaced people “towards countries where they face persecution and violence.”

It will also help in terms of “balancing our concerns about national security with concern for fundamental human rights.”

When it comes to protecting migrants and refugees, this imperative reminds us of the need to both recognize and defend “the inviolable dignity” of those who flee from precarious situations in search of safety and security, in order to prevent their exploitation.

On this point, the Pope turned specifically to women and children, who are often exposed to risks and abuses “that can even amount to enslavement.”

Integrating, then, means allowing refugees and migrants “to participate fully in the life of the society that welcomes them, as part of a process of mutual enrichment and fruitful cooperation in service of the integral human development of the local community.”

With more than 250 million migrants around the world, 22.5 million of whom are refugees, opening our hearts is not enough, Francis said, but action is needed.

The 20th century was marked by wars, conflicts, genocides and 'ethnic cleansings,' he said, noting that this has not changed, but now other factors are contributing to the migration issue, such as an increase in the number of families seeking a better future with more professional and educational opportunities.

Referring to his 2015 encyclical Laudato Si, the Pope noted that there is also a rise in the number of migrants fleeing growing poverty in their homeland caused by environmental degradation.

Most people migrate through regular channels, but some take more dangerous routes out of desperation when their own countries “offer neither safety nor opportunity, and every legal pathway appears impractical, blocked or too slow,” he said.

In many destination countries there has been a rise in rhetoric “decrying the risks posed to national security or the high cost of welcoming new arrivals.” And this rhetoric, he said, “demeans the human dignity due to all as sons and daughters of God.”

“Those who, for what may be political reasons, foment fear of migrants instead of building peace are sowing violence, racial discrimination and xenophobia, which are matters of great concern for all those concerned for the safety of every human being,” he said.

The numbers indicate that migrants will continue to play a major part in the international community in the future, Francis said. And while some consider this a threat, he invited the world “to view it with confidence as an opportunity to build peace.”

Pope Francis then turned to the proposal for the 2018 U.N. global compacts on migration and refugees, which he said will provide a framework for policy proposals and practical steps to be taken.

These compacts “need to be inspired by compassion, foresight and courage, so as to take advantage of every opportunity to advance the peace-building process,” he said. Only by doing this can international politics avoid “surrendering to cynicism and to the globalization of indifference.”

He stressed the need for greater dialogue and coordination within the international community, saying that beyond national borders, “higher numbers of refugees may be welcomed – or better welcomed – also by less wealthy countries, if international cooperation guarantees them the necessary funding.”

Quoting St. John Paul II's 2004 message for the World Day of Migrants and Refugees,Francis said “if the dream of a peaceful world is shared by all, if the refugees’ and migrants’ contribution is properly evaluated, then humanity can become more and more of a universal family and our earth a true common home.”

Throughout history many people have believed in this dream, he said, including St. Frances Xavier Cabrini, a missionary who spent her life working with Italian immigrants in the United States.

“This remarkable woman, who devoted her life to the service of migrants and became their patron saint, taught us to welcome, protect, promote and integrate our brothers and sisters,” the Pope said.

He closed his message praying that through her intercession, the Lord would “enable all of us to experience that a harvest of righteousness is sown in peace by those who make peace.”