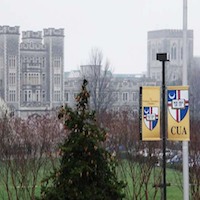 After Hurricanes Irma and Maria swept through Puerto Rico leaving a trail of disaster, the Catholic University of America announced this week that it will welcome Puerto Rican students who want to continue their undergraduate education free of charge.

“Inspired by the example of Pope Francis and our bishops, we wanted to make a more significant impact by offering our support during the spring semester,” John Garvey, President of Catholic University of America, said Nov. 6.

“We believe the best support we can provide is a welcoming community where impacted students can continue their academic pursuits,” Garvey continued.

In August, Hurricane Irma caused widespread damage throughout the Caribbean and parts of the U.S., leaving millions in Puerto Rico without power. Only a few weeks later, Hurricane Maria swept through, causing additional major damage in Puerto Rico and across the northeastern Caribbean. Gov. Ricardo Rossello of Puerto Rico called the event a humanitarian crisis.

The official death toll from the hurricanes that hit Puerto Rico currently stands at 55, although a new report released last week claims that the number could be hundreds higher, potentially reaching 500.

Following Hurricanes Irma and Maria, the Catholic University of America was actively involved in supporting the victims of the natural disaster.

“Throughout the fall semester our University community has provided assistance to our brothers and sisters in Puerto Rico and to our students with ties there,” Garvey noted.

However, the university wanted to do more and is now opening enrollment for the spring 2018 semester for currently enrolled students at colleges and universities in Puerto Rico who want to enroll with visitor status. Tuition and all standard fees for up to 40 students will be waived.

Students from any major and program of study will be accepted, and the Catholic University of America is willing to accommodate these needs.

Additionally, students who take a at least three courses (or nine credits) would also qualify for on-campus housing, with standard charges. A special orientation for Puerto Rican students will be available in the spring before classes begin.

Applications are being accepted through Dec. 15.

Catholic University of America was founded by the Catholic bishops of the United States and is located on a 176-acre campus in Washington, D.C. The university holds 12 schools and 21 research facilities and aims to “cultivate Catholic Minds in all things,” according to their website.