Daily Gospel
Liturgical Cycle A
The Banquet Is Prepared
Matthew 22: 1-14 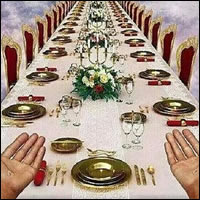 Once more Jesus spoke to them in parables, saying: "The kingdom of heaven may be compared to a king who gave a wedding banquet for his son. He sent his slaves to call those who had been invited to the wedding banquet, but they would not come. Again, he sent other slaves, saying, 'Tell those who have been invited: Look, I have prepared my dinner, my oxen and my fat calves have been slaughtered, and everything is ready; come to the wedding banquet.' But they made light of it and went away, one to his farm, another to his business, while the rest seized his slaves, mistreated them, and killed them. The king was enraged. He sent his troops, destroyed those murderers, and burned their city. Then he said to his slaves, 'The wedding is ready, but those invited were not worthy. Go therefore into the main streets, and invite everyone you find to the wedding banquet.' Those slaves went out into the streets and gathered all whom they found, both good and bad; so the wedding hall was filled with guests. But when the king came in to see the guests, he noticed a man there who was not wearing a wedding robe, and he said to him, 'Friend, how did you get in here without a wedding robe?' And he was speechless. Then the king said to the attendants, 'Bind him hand and foot, and throw him into the outer darkness, where there will be weeping and gnashing of teeth.' For many are called, but few are chosen."

Introductory Prayer: Lord, I believe that you are present here as I turn to you in prayer. I trust and have confidence in your desire to give me every grace I need to receive today. Thank you for your love, thank you for your immense generosity toward me. I give you my life and my love in return.

Petition: Father, help me to prepare to be received into your heavenly kingdom.

1. A Banquet beyond Belief: In Palestine during Christ’s time, few festive celebrations rivaled any wedding banquet, let alone a royal one. A wedding was a joyous time, the greatest moment in the lives of the newlyweds. For a royal wedding, it was the greatest moment in the life of the whole kingdom. With his parable of the royal wedding banquet, Christ is giving us a sense of the heaven that he is preparing for us. He is telling each of us, “There is nothing greater than what I want to celebrate with you in eternity!” So if any of our ideas of heaven include something that doesn’t seem attractive or worth-while, we haven’t yet understood heaven. We should ask Christ to give us a glimpse of the joy he wants us to have with him in heaven.

2. Worthy Is as Worthy Does: The king sent invitations to many people, but the response was not what he had hoped for. They rejected his generosity, preferring their own less-than-stellar lives (one went off to his farm, another to attend to some business) over accepting the invitation and participating in the king’s rejoicing. Of course, none of them really deserved to be invited: They hadn’t made themselves worthy by some merit of their own. The king invited them out of his generosity. What made them truly unworthy was their lack of response to this generosity. Their “worthiness” was a gift given to them freely, and it was lost only when they refused the gift. We might ask ourselves, “Am I worthy of heaven?” If we are honest, we realize that the answer is “No.” But in Christ’s eyes, that’s not the important question. The real question is, “Am I responding to and accepting the gifts he has already extended to me?”

3. Underdressed for the Occasion: It is embarrassing for both host and guest when a guest arrives at an elegant banquet dressed in shorts and a t-shirt—thinking he was going to an outdoor pig roast or because he did not know any better. It is another situation altogether when the guest intentionally doesn’t dress up because he doesn’t care, or is presumptuous. Then the host is offended, not just embarrassed. In this parable the king is offended because the guest knew he needed to wear a wedding robe and chose not to. Living in God’s sanctifying grace and friendship is the wedding robe we need to wear in order to be received into the eternal banquet. Christ is warning us against the ultimate pride of presumption: showing up at heaven’s gate without the one thing we know we need in order to share in Christ’s joy. If we strive every day to please our Lord and to live in his grace, we’ll have our wedding gown ready for the banquet.

Conversation with Christ: Lord Jesus, the gift of heaven you have gained for me is beyond any merit of my own, but it shows me how great your generosity is. How can I not but thank you? How can I not but strive each day to respond to and accept with joyful humility all the graces you want to give me, even when it is most difficult for me?

Resolution: To respond to God’s love today, I will accept willingly any difficulty or hardship that comes my way.