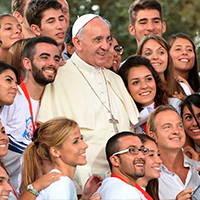 Pope Francis announced Wednesday that ahead of next year's synod of bishops on youth, a preliminary meeting will take place drawing young people from various countries and walks of life.

The gathering will give them a platform to share not only their convictions in the faith, but also their doubts and critiques.

“With this path the Church wishes to listen to the voices, feelings, faith and even the doubts and critiques of the youth,” Pope Francis said during his Oct. 4 General Audience.

The meeting is scheduled to take place March 19-24, 2018 – seven months before the synod – and will draw youth from countries all over the world, including non-Catholics and non-Christians.

The synod, titled “Young People, Faith and the Discernment of Vocation,” is scheduled to take place in a year's time, in October 2018.

According to an Oct. 4 communique from the Synod of Bishops, participants in the pre-synod meeting will represent bishops' conferences and the Eastern Churches, as well as youth who are consecrated or preparing for the priesthood.

Youth involved in various associations and ecclesial movements will also participate alongside peers from other Christian denominations, other religions, as well as those skeptical of religion.

The young people who come will also represent various fields, including those still in school, those already working, and those involved in sports, the arts, and volunteering activities. Young people from the “extreme existential peripheries” will also be invited along with experts, educators, and trainers engaged in helping youth to “discern their life choices.”

At the end of the meeting, which is being organized by the Synod of Bishops in collaboration with the Dicastery for Laity, Family and Life, conclusions from the discussion will be compiled and given to synod participants with other documentation in order to “encourage their reflection and further examination.”

According to the Synod of Bishops, the pre-synod discussion is meant to compliment and “enrich” the consultation that has already begun with the publication of the synod's preparatory document and a questionnaire available for youth to fill out online.

The dates for the meeting were selected intentionally to coincide with the celebration of the 2018 diocesan World Youth Day event, titled “Do not be afraid, Mary, for you have found favor with God,” which is traditionally celebrated on Palm Sunday with Mass celebrated by the Pope.

In their communique, the Synod of Bishops thanked the Pope convoking the meeting, “which will allow young people to express their expectations and desires, as well as their uncertainties and concerns in the complex events of today’s world.”