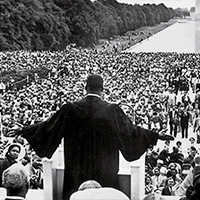 “As a society, we need to stop making excuses and commit ourselves to a movement for nonviolence that involves every one of us,” Bishop George Murry of Youngstown, chair of the U.S. bishops’ Ad Hoc Committee Against Racism, stated Monday.

The gathering of Christian leaders took place Oct. 2 at the Dr. Martin Luther King, Jr. Memorial on the National Mall in Washington, D.C. Carl Anderson, Supreme Knight of the Knights of Columbus, was present, along with Bishop Murry; Edwin Bass, a leader of the Church of God in Christ, and Eugene Rivers III, founder of the W.J. Seymour Institute for Black Church and Policy Studies and a Pentecostal minister.

The leaders called attention to King’s example of non-violent protest against social injustices, particularly on the 60th anniversary of his essay “Nonviolence and Social Justice.” They called for 2018 to be declared the year of Martin Luther King, Jr.

In his 1957 essay, King wrote that “when oppressed people rise up against oppression there is no stopping point short of full freedom.”

“In struggling for human dignity, the oppressed people of the world must not allow themselves to become bitter or indulge in hate campaigns,” he added. “Along the way of life, someone must have the sense enough and the morality enough to cut off the chain of hate. This can only be done by projecting the ethics of love to the center of our lives.”

Yet, Anderson noted at Monday’s gathering, “things did not immediately get better in 1957,” as bombings of churches and beatings and killings of African-American protesters of racism ravaged the country.

“Reverend King held the high ground,” Anderson said, believing that “in a democracy, there can be no place for political violence.”

The gathering was also held less than two months after a white supremacist “Unite the Right” rally occurred in Charlottesville, Va. to protest the removal of a statue of Confederate general Robert E. Lee. A coalition of various groups and religious leaders formed a counter-protest. On Saturday, Aug. 12, James Alex Fields, Jr., 20, drove a car into the counter-protest, killing 32 year-old Heather Heyer.

On August 23, the U.S. bishops formed an Ad Hoc Committee Against Racism and named Bishop Murry as the chair.

Also since that time, other alt-right rallies have been formed, as well as counter-protests, with some of the protesters resorting to violence.

In St. Louis on the weekend of Sept. 15-17, demonstrators protested the acquittal of former St. Louis police officer Jason Stockley in the 2011 fatal shooting of Anthony Lamar Smith.

Most of the protesters were reportedly non-violent, although a minority escalated the protests at night into violence against police offers and vandalism of buildings, including the mayor’s house. Officers were reportedly heard chanting “Whose streets? Our streets.” Over 100 people were arrested.

The Knights of Columbus and the Seymour Institute for Black Church and Policy Studies sent a letter to religious leaders around the country dated Aug. 30, asking them to advocate for non-violence “to help lead our country away from the precipice of violence and toward a future of honest and open civil discourse and respect for the dignity of each person.”

The letter’s purpose, Anderson said, was to spur “important conversations that will help us find civility in our public discourse and unity as Americans working together for the common good.”

Hours before the Monday press conference, a lone gunman killed at least 58 people at a country music concert in Las Vegas, Nev. before killing himself, in the deadliest mass shooting in modern United States history. Stephen Paddock, 64, was armed with machine guns and shot down into the Route 91 Harvest Festival from a high-rise hotel suite.

Religious leaders present at the Martin Luther King, Jr. Memorial decried the act of violence and prayed for the victims and all harmed by the shooting.

“As always in these situations, one finds it hard to say things that don’t sound like clichés,” Bishop Murry said.

“We have too much violence in our society, and everything we say is beginning to seem tired and repetitive,” he said. And although all must commit to non-violence, he said, “something deeper” is needed.

“That commitment requires true conversion. Each of us needs to restore the love that comes with true friendship,” he said. “A society should be a community. And unless we recover the sense that we are all in this together, because we are one family, I fear we will not be able to stop the violence trends we are facing.”

Leaders also spoke about the need to address systemic racism in U.S. society. Bishop Murry thanked the Knights of Columbus for their efforts in this initiative, saying they “have been a consistent voice for

racial equality since they were created.”

Anderson noted that there has been “renewed racism by groups like the Ku Klux Klan” lately.

“Today as then, we stand united in the principle that all are created equal, and we reiterate the words of Pope Francis last month, calling for the rejection of violence, all violence, in political life,” he said.

“We believe the way of non-violence is as relevant today as ever.”