Vatican
Love of neighbor must begin with love of God
Love to one's neighbor corresponds to the mandate of Christ. 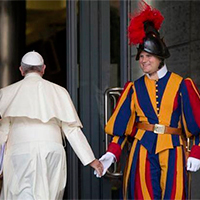