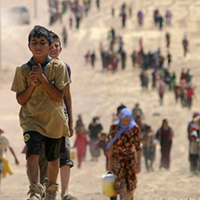 The Trump administration is reportedly planning to further reduce the number of refugees the U.S. will accept in the coming fiscal year, drawing concern from the U.S. bishops and others.

“We’re strongly urging the administration, the President, to set a Presidential determination of at least 75,000 [refugees],” Matt Wilch of the Office of Migration and Refugee Services at the U.S. Conference of Catholic Bishops told CNA of reported changes to the number of refugees the U.S. plans to accept in the 2018 fiscal year.

The New York Times reported Tuesday that the Trump administration is planning to further reduce the number of refugee admissions for the 2018 fiscal year, “according to current and former government officials familiar with the discussions.”

However, in a March executive order, President Donald Trump ordered a four-month halt to U.S. refugee admissions so that the resettlement program could be reviewed for its security. He set a cap on refugee admissions for the fiscal year at 50,000, well short of the 110,000 originally planned.

Now the administration may be reducing its refugee quota even further, to below 50,000.

The Executive Committee of the U.S. Conference of Catholic Bishops said in a written statement Tuesday that they were “troubled and deeply concerned” at reports that the administration was considering the reduction, which they called “inhumane.”

“We implore the administration to show mercy and compassion for those seeking refuge, and to advance the American value of freedom through providing safe harbor to those fleeing tyranny and religious persecution,” the bishops said.

The conference proposed a goal of 75,000 refugees instead. “We think it’s really time to get back to the serious business of saving lives, and we urge the administration to have the total this coming year be 75,000,” Wilch told CNA Thursday.

In 2016, then-chair of the U.S. Commission on International Religious Freedom Dr. Robert George said the refugee resettlement program was secure, and that the U.S. should ultimately look to increase the number of Syrian refugees it resettles to 100,000.

A reduction in refugee admissions would come at a time when the number of displaced persons across the globe is at an all-time high, the group Human Rights First said.

“While ten percent of the world’s 21 million refugees are estimated to need resettlement, only about one percent have access to resettlement,” they said.

Furthermore, several countries neighboring Syria like Lebanon, Jordan, and Turkey, are hosting the bulk of refugees fleeing the six year-long conflict there, the largest refugee crisis in the world, HRF said.

If the U.S. and other countries decide to accept fewer refugees, it could contribute to the destabilization of Syria’s neighbors who are already at or nearing capacity for hosting refugees.

“The United States’ refugee admissions program is not a zero-sum game; we are more than capable of providing safety to those fleeing violence and persecution around the world,” Eleanor Acer of Human Rights First stated.