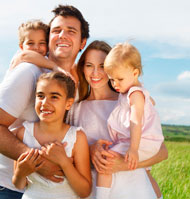 That healthy family life plays a vital role in the well-being of society is well established. A recent study provides ample detail regarding the economic impact of families.

“Strong Families, Prosperous States: Do Healthy Families Affect the Wealth of State?” was a joint project of the Institute of Family Studies and the American Enterprise Institute.

Authors W. Bradford Wilcox, Joseph Price, and Robert I. Lerman, argued that what happens to marriage and family structures has a direct impact on economic growth and mobility, child poverty, and family income.

“Men and women’s understanding of their economic interest, as well as their relationship to work and the marketplace, depend a great deal upon their marital and parental status,” they affirmed.

In addition, they pointed out that families often encourage all kinds of virtues, such as a strong work ethic, which will contribute to greater economic success. Growing up in intact two-parent households not only makes it more likely that children will avoid disciplinary problems and do better at school, but it also leads to improved employment opportunities.

Upward economic mobility is higher for lower-income children who are raised in regions with a higher level of two-parent families. Studies have also shown that declines in marriage are linked to significant increases in child poverty rates.

Young men especially benefit from marriage as it helps them settle down and avoid risky or antisocial behavior.

The study goes into some detail on the differences between the states in America regarding family composition and economic levels. One of the conclusions the research points to be a clear link between strong families and median family income, with higher levels of income linked to higher levels of marriage.

In spite of the economic benefits of families the study pointed out that government policies often hamper family life. The welfare system penalizes low income couples that wish to marry because a single or cohabiting mother receives higher payments if she remains unmarried.

Job prospects for poor and working class people are limited and the authors of the study called upon the government to strengthen vocational training and the opportunities for apprenticeship.

They also recommended that more be done to discourage divorce, particularly given that around one-third of couples contemplating divorce express interest in reconciliation. In some circumstances the waiting period for divorce could be extended and more could be done to help couples who are struggling to remain together.

Other recent studies confirm the relationship between marriage and economic well-being. A study released in August by the UK’s Marriage Foundation revealed married mothers had significantly higher incomes than single mothers.

In general women with higher levels of income and university degrees were much more likely to be married.

One example of the correlation between low income and single parenthood is that 60% of lone parents receive housing benefit compared to just 10% of couple parents.

In addition cohabiting couples are much more unstable than those who are married. Cohabiting couples make up only 19% of parents but account for half of all family breakdowns according to the Marriage Foundation.

Sir Paul Coleridge, chairman of the foundation also pointed out: “Whether through the psychological impact of parental separation or the loss of contact with one parent, children living in lone parent families tend to fare worst on almost any negative social indicator.”

The study concluded that: “The message to policy-makers – and to society in general – is that efforts to reduce inequality and poverty will inevitably fall short unless and until they also encourage substantially higher levels of marriage among those in lower socio-economic groups.”

Yet, in spite of the clear evidence of this and numerous other studies governments frequently do the opposite, by penalizing families through the tax system. Ireland’s Iona Institute highlighted this in a study just published.

“Taxation and the Family: Restoring Balance and Fairness,” found that “A family with one wage-earner and three children earning one and a half times the average industrial wage (around €65,000 a year) is worse off by more than €8,000 under today’s tax system than they would have been in 1974.

While child benefit payments compensate for some of this loss a family with three children is still worse off by over €3,000.

Overall, the study found that a quarter of a million single income families are penalized for having a spouse working in the home.

The tax system is structured according to the idea that both spouses want to work, and to put their children in child care. In a survey, however, the Iona Institute found that only 17% of families prefer to have children put into day care.

“The state should be assisting the family in defending itself,” the study concluded. A conclusion valid worldwide, not just for Ireland.