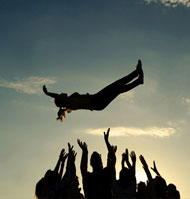 Jesus moved about within Galilee; but he did not wish to travel in Judea, because the Jews were trying to kill him. But the Jewish feast of Tabernacles was near. But when his brothers had gone up to the feast, he himself also went up, not openly but as it were in secret. So some of the inhabitants of Jerusalem said, "Is he not the one they are trying to kill? And look, he is speaking openly and they say nothing to him. Could the authorities have realized that he is the Christ? But we know where he is from. When the Christ comes, no one will know where he is from." So Jesus cried out in the Temple area as he was teaching and said, "You know me and also know where I am from. Yet I did not come on my own, but the one who sent me, whom you do not know, is true. I know him, because I am from him, and he sent me." So they tried to arrest him, but no one laid a hand upon him, because his hour had not yet come.

Introductory Prayer: Jesus, I truly believe and hope in you and your Gospel. You have touched me by the example of trust you had in your Father’s plan. I adore you and thank you with my whole heart.

Petition: Lord, help me to trust more in your divine providence.

1. A Way Out When Cornered: A cornered bear reacts by the instinct of self-preservation and fights until death. Christ, however, shows an altogether different attitude when challenged. He seems always to be calm and in control of every situation. He knows that not a single hair will fall from his head unless the Father deliberately permits it to occur. Many times our fears corner us to the point that we get spooked. To conquer our fears, we need to believe more, hope more, and love Christ much more.

2. The Force of Love: It is interesting to note that Jesus originally planned to stay behind in Galilee. But out of charity and trust in the Father’s will, Jesus set out on the perilous journey to Judea. Once there, he forgot the danger that loomed before him. Christ felt a renewed strength as he had compassion for the lost sheep in Judea. Nothing could diminish his resolve to feed the spiritually hungry, cure the sick, and teach the ignorant. Love gave Christ the capacity to give himself more. Love protects life from prejudices and complaints.

3. Proof of God’s Love: The soldiers tried to arrest Jesus, but they were thwarted. The Father had decided that his Son was not to be given up yet. Cancer, global warming, the nuclear bomb, terrorism and natural disasters – things that might seem to be threats to us – should not make us fearful. Trust is really trust! Jesus invites us to trust, and this is powerful. Saint Paul says, “All things work together for good for those who love God” (Romans 8:28).  The important thing in life is for us to keep our thoughts and efforts focused on God’s will and to go about doing good, generously serving others. “Seek his kingdom, and these other things will be given you besides” (Luke 12:31).

Conversation with Christ: My Lord and Savior, I know that my vision is often short-sighted. Teach me to love and to trust. Enlarge my heart so that I can endure adverse situations and predicaments for the sake of my eternal salvation. Jesus, I trust in you!

Resolution: Today when contradictions flare up at the workplace or at home, I will not sigh in despair. Rather, I will make an act of hope: “Long live Christ the King!”