Daily Gospel
Liturgical Cycle A
The Desire to be Cured
John 5:1-16, Tuesday of the Fourth Week of Lent. Cycle A 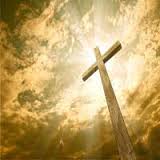