Daily Gospel
Liturgical Cycle A
Forgiveness from the Heart
Matthew 18:21-35, Tuesday of the Third Week of Lent. Cycle A 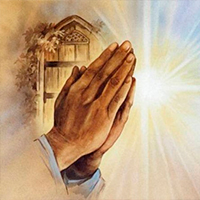 Peter approached Jesus and asked him, "Lord, if my brother sins against me, how often must I forgive him? As many as seven times?” Jesus answered, "I say to you, not seven times but seventy-seven times. That is why the kingdom of heaven may be likened to a king who decided to settle accounts with his servants. When he began the accounting, a debtor was brought before him who owed him a huge amount. Since he had no way of paying it back, his master ordered him to be sold, along with his wife, his children, and all his property, in payment of the debt. At that, the servant fell down, did him homage, and said, 'Be patient with me, and I will pay you back in full.' Moved with compassion the master of that servant let him go and forgave him the loan. When that servant had left, he found one of his fellow servants who owed him a much smaller amount. He seized him and started to choke him, demanding, 'Pay back what you owe.' Falling to his knees, his fellow servant begged him, 'Be patient with me, and I will pay you back.' But he refused. Instead, he had him put in prison until he paid back the debt. Now when his fellow servants saw what had happened, they were deeply disturbed, and went to their master and reported the whole affair. His master summoned him and said to him, 'You wicked servant! I forgave you your entire debt because you begged me to. Should you not have had pity on your fellow servant, as I had pity on you?' Then in anger his master handed him over to the torturers until he should pay back the whole debt. So will my heavenly Father do to you, unless each of you forgives his brother from his heart."

Introductory Prayer: Lord Jesus, as I prepare for the coming of Easter during this Lenten season, I turn to you in prayer. You have been merciful to me. Many times you have pardoned the great debt I owe. I trust in your merciful love and wish to transmit your love to many others faithfully. Here I am, Lord, ready to learn from your tender heart.

Petition: Lord, enlighten me to your gift of mercy.

1. An Unpayable Debt: Peter asks Jesus how many times he should forgive his brother. Jesus gives a short answer, telling a parable to make sure his answer is understood. In the parable God is the king, and we are all the servants who owe the king a huge amount. We are all in debt to God. He created us and keeps us in existence and gives us every good thing we have, every talent and virtue. We owe God everything. He owes us nothing. Do my daily thoughts and actions reflect this truth?

2. The Forgiving King: The servant, not being able to pay, falls to his knees and begs for more time so that he can pay back the debt. The king offers him more than just time – he pardons the entire debt. God is generous. When we turn to him and ask for forgiveness, he offers us much more than we could hope for – he pardons our entire debt. Then why, we might ask, does the king settle accounts with his servant if he is so generous? Why not pardon the debt from the beginning instead of ordering him along with his wife and children to be sold? He calls the servant to account so that the servant will realize how much he owes and in realizing this, he might imitate God when dealing with his fellow-worker. God does not want us to be punished for our sins. He desires to forgive us the great debt we owe him, but he calls us to account for our sins in the hope that we will recognize how much we have both received from him and owe to him and thus will ask for forgiveness.

3. Unequal Treatment and Abuse of Freedom: After being pardoned, the servant does not treat his debtor in the same merciful manner. He sends him to prison. He had every right to do so. In justice, his fellow servant owed him money; but in doing so he abuses the liberty that he has just been given. He does not stop to reflect that in this moment he himself should rightly be in slavery, sold along with his wife and children in order to pay his debt. He does not reflect that he is able to confront his fellow servant only because the king has had pity on him in the first place, giving him liberty. The offenses we suffer from our fellow men are real offenses, but before we demand justice we must stop and reflect that it is only because God has forgiven us our sins that we have the liberty to demand reparation from our fellow men. That reflection must lead us to have the same mercy with our fellow men that God has had with us.

Conversation with Christ: Lord thank you for this time of prayer. I must recognize that you have been merciful with me and forgiven me the great debt I owe. Thank you for the many times you have given me a second chance. During this time of Lent, help me to practice mercy toward those who owe or offend me.

Resolution: I will think of someone who has offended me and say a prayer asking God to help me forgive them.