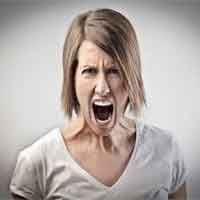 I´m angry. A lot. This circumstance typically advises against doing anything that can affect other people, such as writing an article. However, I continue. I have just written a paragraph and already I realize it's not so bad ... but I'm still angry. Quite.

Difficult to frame everything surrounding an anger and, once again, writing this article is much easier to practice their content. Still, there are principles that can help somehow someone at some point. The best I've read-and contrasted with reality is in the most famous work of Daniel Goleman (Emotional Intelligence). Based on the competencies of emotional intelligence referred by Harvard psychologist Peter Salovey, Goleman brings real cases and affordable explanations of neurology. The author glosses and develops this conceptual model in 5 steps.

1. KNOW YOUR EMOTIONS THE

"Knowledge of self, that is, the ability to recognize a feeling at the same time it appears, is the cornerstone of emotional intelligence (...). The inability to perceive our feelings completely leaves us at their mercy. People with greater certainty of their emotions often run their lives better, as they have a sure what their real feelings knowledge, for example, when deciding whom to marry or what profession to choose. “Logically, emotional ability does not reduce its consequences to those choices vital impact. Discern the emotions and the extent to which affect us have everyday importance.

We should be much know what people and what situations cause us joy, sadness, anxiety, excitement, etc. In the case of anger, it may happen that we know in advance to go to a certain place or meet certain person adversely alter our mood. Therefore I know is the first step ... we not always give.

"The self-awareness is a basic skill that allows us to control our feelings and adapt to the times." Needless to say how relevant this capacity can be compared with anger. "People who lack this ability have to constantly struggle with the unpleasant tensions, while, on the contrary, who stand in the exercise of this capacity recover much more quickly from setbacks and disappointments of life."

Each controls and ritualized his emotions as he can. Four cases: the one who crosses herself before entering the office of his superior, which mutes the tread of her heels when walking in the ear circle of his boss, he counts up to 20 before responding to a loaded question and that rests hours or days in the drafts folder an e-mail before sending more power than electronic message.

"The control of emotional life and its subordination to a goal is essential to spur and sustain attention, motivation and creativity. The emotional self-the ability to delay gratification and stifling impulsiveness is an imponderable that underlies all achievement (...). People who have this skill tend to be more productive and effective in all companies that undertake ".

For self-motivated, equidistance between the naive optimism that neither remembers the past and foresees the future, and hopeless pessimism, blinding any possible improvement.

Daniel Goleman points out that -capacity empathy take the place of the others is based on emotional self-awareness and constitutes the fundamental "people skill". "Empathic people usually tune in to the subtle social signals that indicate what they need or want others and this ability makes them more suitable for the performance of vocations such as health professions, teaching, sales and business management."

This ability facilitates understanding-not necessarily justify-behaviors, decisions and alien ways that oppose us ... and provoke our anger. According to the role we play against other people in the family or at work, empathy give us a remarkable to harmonize, reconcile, unite wills inspire confidence and power.

The author says that "the art of relationships is based largely on the ability to interact appropriately with others' emotions (...). These are the skills that underlie popularity, leadership and interpersonal effectiveness. People who excel in these skills tend to be real "stars" who are successful in all activities related to interpersonal relationship. "

Read the previous 5 points, I'm angry, but I begin to wonder not worth it. "Anger is the most seductive of the negative emotions because the internal monologue that feeds it provides convincing arguments to justify the fact that you can download on someone. Unlike what happens in the case of melancholy, anger is energizing", especially in those blood flows through the veins instead of “horchata”.

Therefore, it is clear that conversation with yourself. A remedy, "reframing the situation in a more positive framework." Otherwise, it is easy to be chained together and exponentially successive anger, rage, anxiety, stress, violence ... I mean, from bad to worse. This is what happens when you download a previous angry with someone outside the situation. Often the family environment suffers from labor and vice versa crisis.

"The first way of watering down the anger is to give utmost attention and realize the thoughts that trigger the first shock of anger (this original assessment confirms and encourages the first explosion, while following only serve to fan the flames and lit). The timing of the anger in which intervene cycle is extremely important because the sooner we do, the better we will get results. In fact, anger can be completely short-circuited if, before giving expression, give some information that can mitigate ".

Antonio Machado account (Juan de Mairena) a student Mairena work presented in four parts: first, against those who accept banquets in his honor, considering fatuous and conceited; the second, against declining the honor of banquets, hypocritical and falsely modest; the third, against attending, by alien parasites honor; and fourth, against those not attending, by envious. The head teacher asked how he thought that job, what the student suggested: Against banquets. The teacher suggested another tight to mind the young author: Against mankind, during banquets.

Sometimes, part of the therapy goes for having a good friend counselor. Further, it is physical distance or at least mentally the cause of our anger person. Several experts agree the simple recipe for a walk to cool our heated microclimate.

18 paragraphs ago he was very angry. Now it will be no and also with a smile. Let's see if me hard.