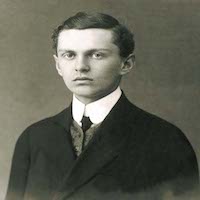 Short Biography:
Educated in Banja Luka, briefly in a military academy, and in Vienna, Austria. Fought on the Italian front of World War I. After the war he studied again in Vienna, in Paris, France, and then taught French language and literature at the University of Zagreb, from which he received his Ph.D. in philosophy.

Though he decided to remain a layman in the world, Ivan took a vow of celibacy, and devoted his free time to the Church. He taught young Croatians, and spoke and wrote to evangelize all Croats. He worked for liturgical revival, and helped institute Catholic Action in Croatia.

Died:
10 May 1928 in Zagreb, Croatia of natural causes
relics transferred to the Shrine of the Holy Heart in Zagreb on 16 December 1977
Patronage:

Died in the peace of the Catholic faith. My life had been Christ, and death was my gain. I am expecting the mercy of the Lord and undivided, complete, eternal possession of the most Holy Heart of Jesus. Happy in peace and joy. My soul is reaching the goal for which it had been created. – Blessed Ivan in a testament he wrote just before his death; today it serves as the epitaph on his tomb.