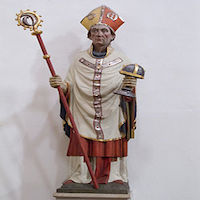 Born in the c.960 in Bavaria (in modern Germany), raised around Churchman, Godehard’s father worked for the canons of Niederaltaich. Godehard joined the canons, and became their provost. Helped reintroduce the Benedictine Rule at Niederaltaich, which then sent abbots to Tegernsee, Hersfeld and Kremsmunster to revive the Benedictine Rule. Bishop of Hildesheim, Germany in 1022. Died in May 4, 1038 of natural causes. His relics were  transported in 1132.