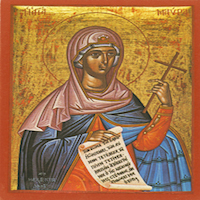 Also known as Moura.Lay woman. Married to Saint Timothy of Antinoe. About twenty days into the marriage, and in the middle of the persecution of Diocletian, Timothy was arrested. As he was being tortured to learn the location of sacred texts, Maura was dragged to the prison; the authorities thought that if they threatened to torture her, Timothy would break. Timothy refused to talk, and Maura made a profession of her faith. Enraged at their defiance, Arrianos, governor of Thebias, ordered her tortured. Witnesses begged that the tormentors release the innocent woman, but she told them that God was all the protection she needed. Martyred with Saint Timothy. Died on the century 286. It took her nine days to die of shock, blood loss and dehydration.