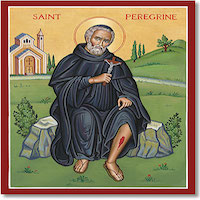 Born wealthy, he spent a worldly youth, and became involved in politics. Peregrine was initially strongly anti–Catholic. During a popular revolt, he struck the papal peace negotiator, Saint Philip Benizi, across the face. Saint Philip calmly turned the other cheek, prayed for the youth, and Peregine had a conversion.

He received a vision of Our Lady who told him to go to Siena, Italy, and there to join the Servites. After training and ordination, they assigned him to his home town. He lived and worked, as much as possible, in complete silence, in solitude, and without sitting down for 30 years in an attempt to do penance for his early life. When he did speak, he was known as a fervant preacher, excellent orator, and gentle confessor. Founded a Servite house at Forli, Italy.

A victim of a spreading cancer in his foot, Peregrine was scheduled for an amputation. He spent the night before the operation in prayer; he received a vision of Christ who touched the diseased area. The next morning, Peregrine found his cancer completely healed.

Died, May 1st, at Forli, Italy of natural causes.