Christian humanism
Humanism in christianity
Michelangelo and Mercy
On the sixth of May we took Rome by storm, killed 6,000 men, plundered the houses, carried off what we found in churches and elsewhere, and finally set fire to a good portion of the town. 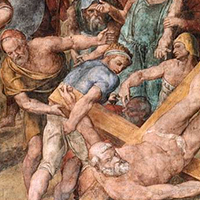 On the sixth of May we took Rome by storm, killed 6,000 men, plundered the houses, carried off what we found in churches and elsewhere, and finally set re to a good portion of the town. ... The Pope fled to Castel Sant’Angelo with his bodyguard, the Cardinals, Bishops, Romans, and members of the Curia who had escaped the massacre. For three weeks we lay siege until, forced by hunger, he had to surrender the castle. ... Here we are, all of us, rich. In September, back in Rome, we pillaged the city more thoroughly and found great hidden treasures. We remained billeted there for another six months.” (J. A. P. Jones, Europe 1500-1600, Nelson, Surrey 1997, 181) So an eyewitness described the sack of Rome in 1527.

It was in 1535, seven years after the wanton destruction wreaked by Protestant mercenaries, that Paul III commissioned Michelangelo Buonarroti to return to the Sistine Chapel and leave a penitential remembrance of the sins suffered by Clement VII, his predecessor (Città del VAtiCAno, Il Vaticano e Roma Cristiana, Libreria Editrice Vaticana, Vatican City 1975, 184). Thus Michelangelo would finish the great work begun with the ceiling of the chapel, filling the entire front wall with his fresco of the exaction of divine justice. Under the terrible strength of the upraised hands and twisted form of Christ, even the Mother of God coils, averting her gaze. Justice and retribution for the sins of men, for the murder, rape, and pillage of Christian against Christian, suspended for a moment in that upraised palm, is about to fall. This is no icon of mercy. Or so it seems.

Almost twenty-five years previous, the tone of Michelangelo’s work had been different. The grandeur of Adam’s outstretched form, far from pessimistic, glories the center of the ceiling. Yet even the ceiling confronts weakness and shame in The Drunkenness of Noah. What sort of unity of design, one might ask, did Michelangelo conceive for the chapel in 1535? The terrifying tortures of the damned—and they are terrifying when you see them up close—contrast shockingly with God’s exuberant creation above, as if someone had transposed Franz Liszt’s Totentanz with its ominous Dies irae into the second movement of Vivaldi’s Primavera. Do Michelangelo’s angels of the apocalypse and enormous book of the damned mean no place for God’s mercy?

Art historians often mention Michelangelo’s admiration for the Belvedere Torso, a work that evidently in influenced his own approach to the body, both in sculpture and fresco. But as a visit to Julius II’s famous collection of statues in the Vatican Museums quickly brings to light, the Belvedere Torso was not the only ancient sculpture informing the style of Il Divino. The Apollo Belvedere, discovered at the end of the fifteenth century, (Il Vaticano e Roma Cristiana, 210) was also known to Michelangelo.

The god of music, truth, and poetry stands proudly erect, head turned, observing an arrow he has just let y. Praised as a pinnacle of beauty and perfection, this statue is where Michelangelo found the face of Adam—and the face of Christ. Thus Michelangelo makes an unmistakable link between the creation of man and Christ. He points back to his masterpiece on the ceiling with its frescoes of the six days of creation, the fall, and the story of Noah, inviting us to look more closely at the prophets and sibyls who foretold the coming of a savior. He reminds us that the lunettes around the entire ceiling depict the ancestors of the Messiah from the genealogies of the gospels. Already on the ceiling, Michelangelo was speaking of Christ and man in Christ. As the Nicene Creed says, “through him—according to the measure of him—all things were made.” But the story had been left un finished.

Understanding, and perhaps redeeming, its dark conclusion of condemnation depends on another famous sculpture of Julius II’s collection tucked into a niche in the Belvedere: Laöcoon. This first century work depicts the tragedy of the Trojan priest of Poseidon. In the Aeneid, Virgil narrates how Laöcoon saw through the ruse of the Trojan horse, drove his spear into its side and heard its hollow groan. To his chagrin and Aeneas’, who tells the tale, not a soul believed him. Bent on Troy’s destruction, Athena sent two enormous snakes to devour him and his sons:

The Laöcoon group brings this moment to life in marble. The powerful Trojan priest wrestles two giant serpents sent by the goddess Athena to devour him and his sons. With his strength failing, he has fallen seated on the altar. The desperate faces of his sons look to their father for aid in vain. Fright, horror, and desperation fill

his eyes as he witnesses his sons’ destruction and his own futile struggle to overcome the destiny of the gods.

It is this image of anguish that Michelangelo transforms into the figure of Christ the Judge. The twisted torso and upraised arms of man struggling against the gods becomes the icon of Christ exacting justice. The agony on the Trojan’s face is replaced with the serenity and strength of the Son in glory. Yet the justice he exacts is not what we would expect. Michelangelo does not omit Christ’s wounds; his left hand seems to point to his open side, and while the shadows on his powerful upraised hands hide the nail marks, they are clearly visible on his feet. Framed in the highest part of the painting we find the instruments of the passion. This is a judge who has exacted justice on himself.

With prophetic eloquence Michelangelo captures the entire message of mercy from the creation of man “in His image and likeness” (Gen 1:27) to the mystery of the Incarnation and the Passion, Death, and Resurrection of Jesus Christ whose grace we can accept or reject. God, who is outside of time, creates man knowing full well that he will sin, yet he creates him in the image of his Son who will come to redeem and to offer to those who would accept him “the right to become children of God” (Jn 1:12). The Last Judgment is truly a monument and penitential remembrance: a monument to what Jesus Christ our Lord, the Son of God, has done for us and a reminder that while we are still here to contemplate it, his open heart remains the open door to paradise.