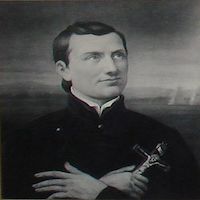 He was born at Mittleborn, Moselle France on November 22, 1822, and died beheaded on May 1st, 1852 at Son Tai, Tonkin Vietnam.
He studied in the seminary at Pont a Mousson and the Grand Seminary of Nancy. Priest. Member of the Paris Society of Foreign Missions in 1846. Missionary to Viet Nam beginning in 1848, preaching first in Hong Kong, and then in the Vietnamese province of Sudoa, then in the Christian area of Bono. There he was betrayed to soldiers who, as part of a persecutions of Emperor Tu-Duc, were hunting Christians. One of the Martyrs of Vietnam.

His head was thrown into the Song-Ka River, his body buried in a nearby village.