Family
Marriage
Attention to Conflicts!
The secret of a good marriage is knowing how to resolve well the conflicts that arise - whether they are serious or not. 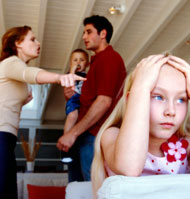