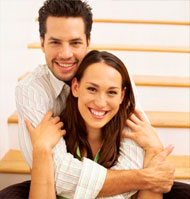 The marriage for a christian believer is more, much more than a civil contract, is a commitment voluntarily and knowingly before God for the whole life. If in other religions can make a religious divorce , not on Christianity, therefore clarified Jesus faced with the question about divorce, "that what God has joined together, let no man put asunder" (Mt 10:9 and Mt 19:6). And this is true for the spouses who are married to each other and to any religious authority.

The civil divorce is a process that cancels a contract, but in the plane of Jesus, is the unshakable commitment. That is why the spouses who have conflicts between them should seek the overcoming, not the destruction of their married life.

The overcoming of marital conflicts is critical for both spouses as well as to the families of both, and those who in some way are affected by such marriage. But the most important thing are the children.

Parents often say that would give up to life by them, but it is extremely rare that have to take that option, as is the need to give their lives for Christ. But it is a matter of daily life, is LIVING LIFE BY THE CHILDREN. It is not the martyrdom what is required of us, but the daily family experience.

The children deserve a vivid marriage between their parents, not seeing them to each one by his side. They deserve to live in the family in accordance with the wish expressed by God, with a father, mother, and children and in their case until the grandchildren.

If is thus willing to give their lives for children, before we have to be prepared to live his life for them, day to day, in family. For them there is to overcome marital conflicts; we cannot resort to the flight of this responsibility, even when angry or frustrated. It is a question of love, to choose between to love itself, which may be selfish, and love due to those who have been given life, and to whom he was offered to love until death separates them, to the other spouse.

The divorce is a process of civil law, but for the Christian does not exist to end a life commitment before God. In some cases the separation of bodies is a sad solution to various failures or problems, but this does not break or just with the commitment for life. The marriage remains in force.

For this vital commitment consciously acquired before God, and by a real love and responsible toward the children, the marriage must be retained, saving, with the assistance requested from the Lord, the differences and conflicts with you siblings, pardoning offenses and misdemeanors committed, and with purpose of Amendment, clear.

The Christian marriage is forever, and is due to the love due to God, to the spouse and children, and even due to the extended family of both.

Do you give your life for the children? Yes, but not by sacrificing mortal, but as daily life in the family, by them. This itself is "giving our lives" for children.