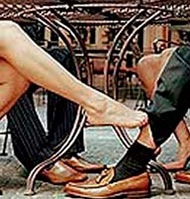 The sin of adultery has been and is still something very frequent in human history. Arises for various reasons and leads to disastrous results: infidelity to own husband or wife, tensions in the family, problems with the children.

Despite the frequency of this sin and the strong condemnation that we find against the same in the Bible, a strange silence seems to bind Him in our days.

Yes: they speak of sins very severe, such as trafficking in human beings, or drug trafficking, or crime or theft, or usury, or the economic speculation that damages to thousands of innocent people. But the adultery, what it says?

For the item not be abandoned in the limbo of oblivion, we can draw out some ideas present in the "Catechism of the Catholic Church" (abbreviated as CIC).

A characterization of this sin appears in two numbers of the catechism, in whom we find several appointments of Sacred Scripture. In the n. 2380, adultery is defined as follows: "This word designates the marital infidelity. When a man and a woman, of which at least one is married, establish a sexual relationship, although occasional, they commit adultery."

Immediately after, the same n. 2380 recalls passages of Scripture which speak of adultery:

The number below explains the grave injustice committed in each adultery. The one who commits it "lack to their commitments. Injures the sign of the Covenant which is the marriage bond. Violate the right of the other spouse and undermines the institution of marriage by breaking the contract that gives origin. Compromises the good of human generation and of children who need the stable union of the fathers" (n. 2381).

This is an act that is always morally illicit, which can never be carried out, or even to get some good (cf. CIC n. 1756). Therefore explains how in the first centuries of the Church the adultery was considered as one of the most serious sins, as were also the murder or idolatry (cf. CIC n. 1447).

With a doctrine that clear, and in a world so confused and manipulator, worth face the adultery to denounce their ills and to help so many men and women to flee from this sin. And if one has fallen into the same, to accompany them with respect and tact, to take the step that allows a conversion mature: to recognize that one has sinned, repent, ask for mercy in the sacrament of confession and repair the damage caused in the family itself.

Only with Catholics brave, who know how to imitate the boldness of San Juan Bautista to denounce the adultery of Herod, even at the risk of his life (cf. Mt 14,1-11), we will be able to expose a bad harmful for each marriage. Thus, from an authentic conversion, many married couples will overcome the evils of adultery, renew your love, and will work with more enthusiasm to be faithful to their marriage commitments.