Surely, many parents have listened to their youngest son say "¡When is grow, I want to be like you!"... 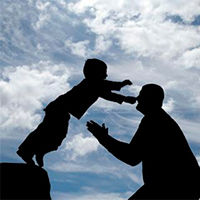 Surely, many parents have listened to their youngest son say "¡When is grow, I want to be like you!". This phrase, coming from the person to which was so  loves can sound like music to the ears of many parents. More for a father attentive, this music could be also become a strong call of attention to personal growth.

"I want to be like you, Dad!", pronounced by the innocent lips of a child, has the power to change the life of dad. Should lead the father to consider not only its role of father and husband, but also his own person in the six aspects of life: physical, spiritual, family, labor, economic and social.

For many parents, the first question that could emerge in his mind and in his heart is: I would like that my son out as I do? And the following: When do my son has my age, how I would like it to be? These two questions, answered sincerely, can convert the soft music of the innocent voice of his son in drums that mark the passage in the march toward personal excellence, guaranteeing the effectiveness in the upbringing of a child.

"I want to be like you, Dad!" is the master key that in their innocence the child puts in the hands of dad to open the door to a rainbow of infinite possibilities and can become both in a masterpiece for the world. This masterpiece must start fixing first in Dad, since the child requires a good model to follow and a good teacher to teach you how to use the chisel to measure that is venturing into the arduous task of establishing its own masterpiece.

Because it is not a good father who form the son as he pleases, but one that will indicate how to handle the chisel so that it removes the excess clay and emergence of its own work of art. Nor is it a good father who always leads to her son in her arms, but one who teaches you how to walk with direction and purpose. The child will be driven by the life guided by the traces that leaves behind his father, more giving their own steps and dancing their own rhythms.

Mother Teresa of Calcutta, expressed this same reality of a poetic way when he wrote to the parents and teachers: "I will show them to fly, but not fly your flight. Show them to dream, but not men shall dream your dream. Show them to live, but will not live your life. However… on each flight, in every life in every dream, will endure always the imprint of the way taught".

"I want to be like you, Dad!" is the springboard that must promote the father, with strength and courage to the eternal heights. The child needs to know the two sides of the coin: the material and the spiritual, the visible and the invisible, the real world and the divine world. And you are going to believe and be filled with faith only when you can see the divine reality, reflected in the BE, attitude, behavior and the face of his own father. Only thus will the Son, to look to the Father, lifted his face, will look up and go through life with the front in high. Because as said Perry Garfinkel: "For a child, the father is a giant from whose shoulders can get a glimpse of the infinite".

"I want to be like you, Dad!" is the challenge that the son launches to the Father so that it makes a stop on the way, reflect, take consciousness, make your own settings and act in accordance with the love he felt for his son. Is an acclamation strong and emphatic wrapped in a soft music that reminds you to the father his role, its responsibility and his love.

And as I know that you love your child and you are doing a wonderful job in it that will serve as a model to your son, I send you a great congratulation. And if your kids are already dads, Congratulations too, because I know that they will endure for ever the footprint of the road that you've taught. And remember that even if your child does not have said with his lips "¡I want to be like you, Dad!", I know that thou hast heard of his little heart of child, and I also know that your child wants to be like you, Dad.