Virtues and Values
Virtues and values - Year 1
About sexual identity and social expression.
Which is my social responsibility about this state of things? 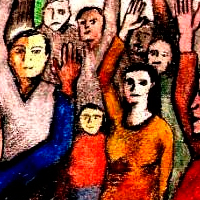 Father, why not? A man can express his feminine side and a woman her masculinity (women use pants, why a man cannot use a skirt?), without the necessity to catalog them into lesbian or gay.-RR

My conviction and experiences are going on an opposite direction, and I think there are many reasons to not disconnect the biology of the behavior. Every day, from the beginning of our lives, we use the senses organs, and this are different in many ways, but most of all, for their neuronal connection, if we are looking at men or women. This is a fascinating theme that can´t be forgotten.

It´s irresponsible, from a scientific point of view, forgetting the change factor but the ideology of genre does this: it takes the biologic reality and says; “This doesn´t matter really”.

Another thing is the relationship between “being” and “expressing”. The expression it´s a social fact, and no just an individual one. Unless we are talking about radical individualism, which by itself wouldn´t be ethic, we must admit that everything that has a social effect comes with a responsibility, and some restrictions from the individual point of view.

For example, imagine a person told you: “I think that a person should talk in a way that he or she will always be listened to, and that´s why I´m convinced that every single conversation must be shouting.” By consequence, this man yells to everybody: on the streets, in restaurants, at church, the park, the library. Soon people starts staring and calling him out, but he insists in his theory. “Human communication its better when you yell.” Everyone knows how something like this would end: everything in a society life comes with care of the common good.

In the case of respect for life or physical integrity, it´s easy to see where the common good is. It´s less obvious, but not less real that this good exists in other dimensions of society. If I decide that I would eat sitting in the floor in every restaurant because I think “this is the correct way to eat”, it would make a rupture that is awkward and useless in society. Who cares of common good, would care in making life possible and better for everyone.

All of this means that, even when social standards are fixed, we shouldn’t consider them an individual whim. If in the same restaurant where the man who wanted to eat in the floor, enters another man that insists in yelling, and other that thinks that deodorants are the beginning of a cosmos collapse, and another one that thinks that waiters should speak him with their eyes closed… Which would be the good in progress?

Regrettably our generations know too much individual, and a little of common good. The solitude of so many people, and the families breaking push us into giving importance just to desires or pleasures: “I want to be a woman” “I want to be a man” “I want a baby” “Wait, I don´t want it anymore: kill it.”

A question every priest should make to himself as psychologist, professor, and councilor. Which is my responsibility before this state of things? Push a little more into individualism, waiting that someday the law will permit that the governors do whatever they want? It shouldn’t be the other way: hearing our nature, biology and body, and also our soul, and then hear the voices that lead to a common good?

I invite you to grow into integrity, from something physiological to the most spiritual; from intimacy to fulfill of the common and social good.

Conversion comes from intelligence brighten by the grace, which takes the decision to fulfill God´s will and His commandments, and especially about love.

The real conversion, just like Jesus told us, is given when the man doesn´t trust himself, nor want to achieve salvation by its own means, instead the man trusts a God who wants to forgive us.

The first thing in a conversion is taking self-consciousness of God´s sanctity, which we´re destined to be in a relationship as our condition of members of His holly village, compromised by our sins. This self-consciousness can be done in different ways: the prodigy son that comes from the lowest helplessness and humiliation. Sometimes it would be the prophetic word, from a spokesman of God that will help with the self-consciousness. Then conversion will be what I mentioned before.

Even though that the Synoptic referred to the first conversion, it can apply to every conversion. It talks about the thin door and the tares that grow on the field, and we don´t have the impression the New Testament said that the Christian lives, besides his sins, away from the Lord. Being Christian is to have an aspiration to sanctity, as an ideal, knowing that God loves us more than we can imagine.

For Jesus the conversion comes with a change in the heart, and it´s interior, and sometimes it can have external expressions. It´s based on the goodness of God, and the desire to have that supernatural love from the Holy Trinity. Jesus invites to conversion not only publicans and prostitutes, but also Pharisees, and rich people observing the Law. Jesus wants that every men, good or offender, to convert.

This conversion is a task that needs grace, the conversion it´s done with faith that answers to God´s call, without forgetting that God acts in every step the man hives toward Him. Conversion is amongst all a “yes” to Jesus, acknowledging divine filiation, the road to find God are, as Cardinal Ratzinger said, as many as people, and the Church and Sacraments are privileged places to find Him.

Conversion is part of the Christian life, even though we´re sinners, we have the grace that leads us to the Father, it´s also sensing the communion with Christ to do His will, purifying our sins to fulfill our commitment to God´s service. Conversion is leaving behind our isolation and participating in Church life.

Because of all already mentioned, conversion and penitence are a reason of joy, we have found a reason to give it all. For Jesus the joy is part of the conversion, and speaks in this sense in wedding banquets, and dresses, and the happiness in Heaven when a sinner converts. The relationship between penitence, conversion, faith and joy is logic, if we remember that the gospel is good news of hope and salvation.

The Great Revolution: the awakening of the baptized

This action is no other than the New Evangelization

The Church must attend in a better way the baptized instead of centering only in the practitioners, because in their “awakening” the life with faith y and participation in Church, comes from the Great Revolution of our society needing to surpass some crisis.

The return of the baptized Catholics to the Church would be truly revolutionary, and on a double scale. The one of the community of faith, because it would revert the decadence tendencies in every ambit. Also it would be a revolution in society due to the new mentality that would be formed in agreement to the Christian conception. This will change the cultural references profoundly.

Twenty-first Century must be the one of the baptized. Most of the population in our country, and in many others, says they are Catholic. And the rest represent an important minority. This means so little in practice, because their behavior, which changes, resembles the part of the population that is careless in a religious way, in other words, the majority of this are baptized, who call themselves Catholic when someone asks about their religion, which means that it represents something in them. We need to awake this self-consciousness, to make the seed of faith grow deeper. It´s demanded by the sacrament we received, and our fidelity to Jesus.

The sacrament of baptism (1213-1274 CIC) is more than just the door to the other sacraments, it´s the sacrament that we have to go through to become children of God, and to participate in His Church (1213 CIC). The baptized have the strength of the sacrament. It´s a seed that needs to be cherished so it can grow, with good soil, and without any other plant suffocating it. Failing to do so, to not make it the first priority, is to obviate the repeated Gospel mandate to go look for the lost sheep. And it´s also a glaring mistake. Don´t doing it in practice, means betting on a passive Church, which expects people to cross their door.

To do so, not as something exceptional but as a massive central task, we need two things. First of all, that the Church, meaning all of us, must be consistent between Jesus doctrine and its practice, what preaches and what it does. And the second thing, to have an organization and assignment of priorities and means according to the end pursued.

It´s a matter of faith, trust in the providence, hope in the results, and praying to God for everything He can, and also acting like everything is in our hands. And with this I´m not telling you anything new.

This action is called New Evangelization. St. John Paul II called it that way around 30 years ago. During his time as pope, the Saint priest promoted preaching of the Gospel of Jesus to everyone that is seeking the truth. What´s “new” with the “new evangelization”? There´s nothing new in the content, God´s word speaks to every man in every time. But, Jesus´s testimony from the Church must adapt to people in our century and place, it must communicate in agreement to the form and style of the times. One of the main characteristics of this evangelization proposed by St John Paul II it´s directed to the ones that live in cultures that are historically Christian. They may be baptized Christians that had heard of Christ, but to the ones that Christian faith has lost their transforming power. Now, having past three decades since this task of evangelization with a poor result, it has become a priority. The Church has lost strength in our country and Europe, this is because of the bad results in this task.

“Church is here to evangelize”. This words are from Pope Paul VI, and they remind us what the identity of the Church is, and the mission it has in the world.

In 2013 Pope Francis, addressing the plenary of the Congregation for the New Evangelization, referred as “new evangelization” as a service composed by three points: primacy of testimony, urgency in going to the meeting, pastoral project focusing on the essentials. The testimony, mainly in this time, is needed, we need believable testimonies, that can make visible the Gospel, and awake attraction to Jesus.

Our action to the “awakening” of the baptized is based in everything: testimony, going to the meeting of the Lord, pastoral project, visibility of the Gospel, beauty of God, and a language that goes to the heart.

It´s also a matter of intelligence, skills, communication, and to go out of the church to meet the baptized, but his won’t do the work if the testimonies aren´t believable and visible, first with an example, and then with words. In many ways the testimonies are uncomprehend and changed in our society. Not even the Pope is free of this risk, mainly when his acts are received in Europe and the States.