Vatican
Documents
Benedict XVI: I Was Too Tired, For Me the Resignation Was a Duty
The Pope Emeritus Talks About His Renunciation and His “Fraternal” Relation With His Successor Francis 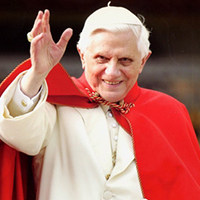 Benedict XVI is very peaceful when he speaks about his historic renunciation to the pontificate, as he was so calm when he communicated the epochal news to the College of Cardinals and to the world.

Moreover, this renunciation “was a duty for me,” confides the Pope Emeritus himself in the interview published today by La Repubblica with theologian Elio Guerriero, Director of the Italian edition of the Communio Review, founded in 1972 by Von Balthasar, De Lubac and Ratzinger himself.

Among other things, Guerriero is about to publish a biography dedicated to Benedict XVI. It is, in fact, a meeting planned to bring the last chapters to the Mater Ecclesiae convent and to offer the writer the occasion to ask “some questions by way of an interview” to the Pope Emeritus, who, “kind and practical as usual” answers: “Ask me the questions, then send me the whole and we’ll see.”

The fulcrum of the conversation is his relationship with his Successor Francis, in this unprecedented historical situation of the coexistence of ‘two Popes’ in the Vatican, in addition, of course, to questions on his renunciation. In this regard, Ratzinger explains: “I had at heart to bring the Year of Faith to fulfilment and to write the Encyclical on Faith that should conclude the course begun with Deus Caritas Est,” but “in 2013 there were numerous commitments that I felt I could no longer carry out.”

First among these was the July WYD at Rio de Janeiro. “After the experience of the trip to Mexico and Cuba (the last of his pontificate ndr) I felt unable to undertake such a demanding trip,” Benedict confides. Moreover, “with the setting given by John Paul II to these Days, the Pope’s physical presence was indispensable” and “and no thought could be given to a television connection or to other ways guaranteed by technology. This also was a circumstance for which the renunciation was a duty for me. “

However, the Pope had the “certain confidence” that even without his presence “the Year of Faith would in any case come to a good end. Faith, in fact, is a grace, God’s generous gift to believers. Therefore, I had the firm conviction that my Successor, exactly as then happened, would also bring to a good end the initiative willed by the Lord and launched by me.”

It was in fact during the trip to Mexico that the decision matured to renounce the Petrine ministry. The trip “was good and moving from many points of view,” but in those same days – continues Ratzinger – “I experienced forcefully the limits of my physical endurance.” “I realized especially that I was no longer able to face in the future transoceanic flights because of the problem of the time zone. Naturally I also spoke about these problems with my doctor, Professor Patrizio Polisca. Thus it became clear that I could no longer take part in the World Youth Day at Rio de Janeiro; against it clearly was the problem of the time zone. Thereafter I had to decide in a relatively brief time on the date of my withdrawal.”

Once the decision was made, however, thought had to be given to practical things. For instance, where to live after the renunciation? Benedict XVI was illumined when remembering that John Paul II had decided that the Mater Ecclesiae convent, which in the past had been the dwelling of the Director of Vatican Radio, should become “a place of contemplative prayer, a source of living water in the Vatican.” “Having learned that the three-year period of the Visitation Sisters was expiring that spring, revealed to me almost naturally was the awareness that this would be the place where I could retire to continue in my way the service of prayer for which John Paul II had allocated this house,” recalls the Pope.

The rest is history. Many, notes the interviewer, expected a decadent scenario in which to mourn “one overcome, one defeated by history.” Instead, there is now in this convent, immersed in greenery, a serene and confident man. “I am fully in agreement,” affirms Ratzinger, “that I should really have been worried if it were not that I was convinced, as I said at the beginning of my pontificate, that I was a simple and humble labourer in the Lord’s vineyard. I was convinced from the beginning of my limitations and I accepted, in a spirit of obedience as I always tried to do in my life. Then there were the more or less great difficulties of the pontificate, but there were also many graces.”

In regard to obedience, Joseph Ratzinger specifies in the interview that obedience to his Successor “was never in discussion.” “At the moment of his election – he recalls – I felt, as so many, a spontaneous feeling of gratitude to Providence. After two Pontiffs from Central Europe, the Lord turned His gaze, so to speak, to the universal Church and invited us to a more extensive, more catholic communion.”

“Personally — he continues — I remained profoundly touched from the first moment by Pope Francis’ extraordinary human availability in my meetings with him. Immediately after his election, he tried to reach me on the telephone. Not succeeding in this attempt, he telephoned me again immediately after his meeting with the universal Church from Saint Peter’s balcony and he spoke to me with great cordiality. Since then he has given me the gift of a wonderfully paternal-fraternal relationship. I often receive small gifts, letters written personally. Before undertaking important trips, the Pope never fails to visit me.”

“The human benevolence with which he treats me – confides the Bavarian Pope – is a particular grace for me in this last phase of my life, for which I can only be grateful. What he says about availability to other men, is not just words; he puts it into practice with me. May the Lord make him feel His benevolence every day. I pray for this to the Lord for him.”