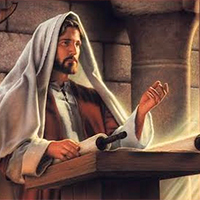 Oh infinite Mystery of Life,
We are nothing,
And still we can praise you
With the voice itself of your Word
Who became the voice of our whole humanity.
Oh, my Trinity, I am nothing in You,
But You are all in me
And then my nothingness is Life… it is eternal life.
Maria Evangelista of the Holy Trinity, O.Carm.

1. Lectio Lucas 20, 27-40
27 Some Sadducees - those who argue that there is no resurrection - approached him and they put this question to him, 28 'Master, Moses prescribed for us, if a man's married brother dies childless, the man must marry the widow to raise up children for his brother. 29 Well then, there were seven brothers; the first, having married a wife, died childless. 30 The second 31 and then the third married the widow. And the same with all seven, they died leaving no children. 32 Finally the woman herself died. 33 Now, at the resurrection, whose wife will she be, since she had been married to all seven?' 34 Jesus replied, 'The children of this world take wives and husbands, 35 but those who are judged worthy of a place in the other world and in the resurrection from the dead do not marry 36 because they can no longer die, for they are the same as the angels, and being children of the resurrection they are children of God. 37 And Moses himself implies that the dead rise again, in the passage about the bush where he calls the Lord the God of Abraham, the God of Isaac and the God of Jacob. 38 Now he is God, not of the dead, but of the living; for to him everyone is alive.' 39 Some scribes then spoke up. They said, 'Well put, Master.' 40 They did not dare to ask him any more questions.

3. Oratio
From Psalm 17
We will be filled, Lord, by contemplating your Face
Listen, Yahweh, to an upright cause,
pay attention to my cry,
lend an ear to my prayer,
my lips free from deceit.
My steps never stray from the paths you lay down,
from your tracks; so my feet never stumble.
I call upon you, God, for you answer me;
turn your ear to me, hear what I say.
Shelter me in the shadow of your wings
But I in my uprightness will see your face,
and when I awake I shall be filled with the vision of you.

4. Contemplatio
From the mystical diary of
Sister Maria Evangelista of the Most Holy Trinity, O.Carm.
This earthly life is also filled with love, with gifts of “truth”, hidden gifts and at the same time, revealed by the sign… I feel an immense gratitude for every human value. To live in communion with creation, in friendship with the brothers, in openness toward the work of God and the work of man, in a continuous experience of the gifts of life, even if in the midst of suffering, even is simply only human, it is a continuous grace, a continuous gift.