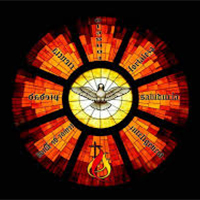 1) Opening prayer
Lord,
our help and guide,
make your love the foundation of our lives.
May our love for you express itself
in our eagerness to do good for others.
You live and reign with the Father and the Holy Spirit,
one God, for ever and ever. Amen.

3) Reflection
• Context. While Jesus is on the way toward Jerusalem, Luke in chapter 11, that precedes our passage, presents him as having the intention to reveal the abyss of the merciful acting of God and at the same time the profound misery hidden in the heart of man and particularly, in those who have the task of being witnesses of the Word and of the work of the Holy Spirit in the world. Jesus presents such realities with a series of reflections which provoke effects in the reader: to feel attracted by the force of his Word to the point of feeling judged interiorly and detached from all desires of greatness which shake and agitate man (9, 46). Besides, the reader identifies himself with various attitudes that the teaching of Jesus arouses: above all, he recognizes himself as follower of Christ in the disciple and sent to precede him in the role of messenger of the kingdom; and also in the one who hesitates somewhat in following him; in the Pharisee or Doctor of the Law, slave of their interpretations and life style. In summary, the course of the reader in chapter 11 is characterized by this encounter with the teaching of Jesus who reveals to him the intimacy of God, the mercy of God’s Heart, but also the truth of his being a man. In chapter 12, instead, Jesus opposes the perverted judgment of man to the goodness of God who always gives with superabundance. Man’s life enters into play here.  It is necessary to be attentive to the perversion of the human judgment or better to the hypocrisy that distorts values in order to privilege only one’s own interests and advantages, more than being interested in life, that life which is accepted gratuitously. The Word of God launches the reader an appeal on how to face the question regarding life: man will be judged on his behaviour at the time of threats. It is necessary to be concerned not so much of the men who can “kill the body” but rather to have at heart the fear of God who judges and corrects. But Jesus does not promise the disciples that they will be free from threats, persecutions, but he assures them that they will have God’s help at the moments of difficulty.
• To know how to recognize Jesus. The courageous commitment to recognize the friendship with Jesus publicly implies as consequence personal communion with Him at the moment of his return to judge the world. At the same time, the betrayal “who will deny me”, the one who is afraid to confess and recognize Jesus publicly, condemns himself. The reader is invited to reflect on the crucial importance of Jesus in the history of salvation: it is necessary to decide either with Jesus or against Him and of his Word of Grace; from this decision, to recognize or to reject Jesus, depends our salvation. Luke makes it evident that the communion that Jesus gives at the present time to his disciples will be confirmed and will becomes perfect at the moment of his coming in glory (“he will come in his glory and of the Father and of the angels”: 9, 26). The call to the Christian community is very evident: even if it has been exposed to the hostility of the world, it is indispensable not to cease to give a courageous witness of Jesus, of communion with him, to value and not to be ashamed to show oneself a Christian.
• Blasphemy against the Holy Spirit. Here Luke understands blasphemy as offensive speaking or speaking against. This verb was applied to Jesus when in 5, 21 he had forgiven sins. The question presented in this passage may give rise in the reader to some difficulty: is blasphemy against the Son of man less grave or serious than the one against the Holy Spirit? The language of Jesus may seem rather strong for the reader of the Gospel of Luke: through the Gospel he has seen Jesus who showed the behaviour of God who goes to look for sinners, who is demanding but who knows how to wait for the moment of return to him or that the sinner attains maturity. In Mark and Matthew blasphemy against the Spirit is the lack of recognizing the power of God in the exorcisms of Jesus. But in Luke it may mean the deliberate and known rejection of the prophetic Spirit that is working in the actions and teaching of Jesus, that is to say, a rejection of the encounter with the merciful acting of salvation with the Father. The lack of recognition of the divine origin of the mission of Jesus, the direct offenses to the person of Jesus, may be forgiven, but anyone who denies the acting of the Holy Spirit in the mission of Jesus will not be forgiven. It is not a question of an opposition between the person of Jesus and the Holy Spirit, or of some contrast, symbol of two diverse periods of history, that of Jesus and that of the community after the Passover, but definitively, the evangelist wants to show that to reject the person of Christ is equal to blasphemy against the Holy Spirit.

4) Personal questions
• Are you aware that to be a Christian requires the need to face difficulties, deceit, dangers, and even to risk one’s own life to give witness of one’s own friendship with Jesus?
• Do you become embarrassed of being a Christian? Are you more concerned about the judgments of men, their approval, are these more important for you or that of losing your friendship with Christ?

5) Concluding Prayer
Yahweh our Lord,
how majestic is your name throughout the world!
Whoever keeps singing of your majesty higher than the heavens,
even through the mouths of children, or of babes in arms. (Ps 8,1-2)