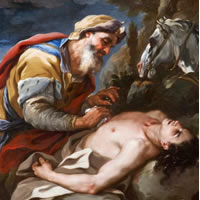 1) OPENING PRAYER
Father,
your love for us
surpasses all our hopes and desires.
Forgive our failings,
keep us in your peace
and lead us in the way of salvation.
We ask this through our Lord Jesus Christ, your Son,
who lives and reigns with you and the Holy Spirit,
one God, for ever and ever. Amen.


2) GOSPEL READING - LUKE 10,25-37
A lawyer stood up and, to test Jesus, asked, 'Master, what must I do to inherit eternal life?' He said to him, 'What is written in the Law? What is your reading of it?' He replied, 'You must love the Lord your God with all your heart, with all your soul, with all your strength, and with all your mind, and your neighbour as yourself.' Jesus said to him, 'You have answered right, do this and life is yours.' But the man was anxious to justify himself and said to Jesus, 'And who is my neighbour?' In answer Jesus said, 'A man was once on his way down from Jerusalem to Jericho and fell into the hands of bandits; they stripped him, beat him and then made off, leaving him half dead. Now a priest happened to be travelling down the same road, but when he saw the man, he passed by on the other side.
In the same way a Levite who came to the place saw him, and passed by on the other side.
But a Samaritan traveller who came on him was moved with compassion when he saw him. He went up to him and bandaged his wounds, pouring oil and wine on them. He then lifted him onto his own mount and took him to an inn and looked after him.
Next day, he took out two denarii and handed them to the innkeeper and said, "Look after him, and on my way back I will make good any extra expense you have."
Which of these three, do you think, proved himself a neighbour to the man who fell into the bandits' hands?'
He replied, 'The one who showed pity towards him.' Jesus said to him, 'Go, and do the same yourself.'

4) PERSONAL QUESTIONS
● The Samaritan of the parable was not of the Jewish people, but he did what Jesus asks. Does this happen today? Do you know people who do not go to Church but live what the Gospel asks? Today, who are the priest, the Levite and the Samaritan?
● The Doctor asks: "Who is my neighbour?" Jesus asks: "Who was the neighbour of the man who was the victim of the bandits"? There are two different points of view: the doctor asks starting from himself. Jesus asks starting from the needs of the other. Which is my perspective or point of view?

5) CONCLUDING PRAYER
I give thanks to Yahweh with all my heart,
in the meeting-place of honest people, in the assembly.
Great are the deeds of Yahweh,
to be pondered by all who delight in them. (Ps 111,1-2)