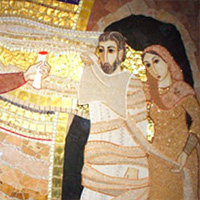 1. Opening prayer
Lord Jesus, send your Spirit to help us to read the Scriptures with the same mind that you read them to the disciples on the way to Emmaus. In the light of the Word, written in the Bible, you helped them to discover the presence of God in the disturbing events of your sentence and death. Thus, the cross that seemed to be the end of all hope became for them the source of life and of resurrection.
Create in us silence so that we may listen to your voice in Creation and inLucas 16,19-31 the Scriptures, in events and in people, above all in the poor and suffering. May your word guide us so that we too, like the two disciples from Emmaus, may experience the force of your resurrection and witness to others that you are alive in our midst as source of fraternity, justice and peace. We ask this of you, Jesus, son of Mary, who revealed to us the Father and sent us your Spirit. Amen.

2. Reading
a) A key to the reading:
In this 26th Sunday of Ordinary Time, the Liturgy places before us the parable of the poor Lazarus, sitting before the door of the rich man. This parable is a faithful mirror, in which is mirrored not only the situation of the society at the time of Jesus, but also our society of the XXI century. The parable is a strong and radical denunciation of this situation, because it clearly indicates that God thinks contrary to that. In the parable there are three persons: the poor man, the rich man and Father Abraham. The poor man has a name, but does not speak. He hardly exists. His only friends are the little dogs which lick his wounds. The rich man does not have a name, but speaks always and insists. He wants to be right, but he does not succeed. Father Abraham is the father of both of them, and loves both, and he calls the rich man who is in hell, but he does not succeed in obtaining that the rich man changes opinion and converts himself. During the reading try to be very attentive to the conversation of the rich man with Father Abraham, to the arguments of the rich man and to the arguments of Father Abraham.
b) A division of the text to help in the reading:
Luke 16, 19-21: The situation of both in this life
Luke 16, 22: The situation of both in the other life
Luke 16, 23-26: The first conversation between the rich man and Abraham
Luke 16, 27-29: The second conversation between the rich man and Abraham
Luke 16, 30-31: The third conversation between the rich man and Abraham
c) Text:
19 'There was a rich man who used to dress in purple and fine linen and feast magnificently every day. 20 And at his gate there used to lie a poor man called Lazarus, covered with sores, 21 who longed to fill himself with what fell from the rich man's table. Even dogs came and licked his sores. 22 Now it happened that the poor man died and was carried away by the angels into Abraham's embrace. The rich man also died and was buried. 23 'In his torment in Hades he looked up and saw Abraham a long way off with Lazarus in his embrace. 24 So he cried out, "Father Abraham, pity me and send Lazarus to dip the tip of his finger in water and cool my tongue, for I am in agony in these flames." 25 Abraham said, "My son, remember that during your life you had your fill of good things, just as Lazarus his fill of bad. Now he is being comforted here while you are in agony. 26 But that is not all: between us and you a great gulf has been fixed, to prevent those who want to cross from our side to yours or from your side to ours." 27 'So he said, "Father, I beg you then to send Lazarus to my father's house, 28 since I have five brothers, to give them warning so that they do not come to this place of torment too." 29 Abraham said, "They have Moses and the prophets, let them listen to them." 30 The rich man replied, "Ah no, father Abraham, but if someone comes to them from the dead, they will repent." 31 Then Abraham said to him, "If they will not listen either to Moses or to the prophets, they will not be convinced even if someone should rise from the dead."

Whoever lives blamelessly,
who acts uprightly,
who speaks the truth from the heart,
who keeps the tongue under control,
who does not wrong a comrade,
who casts no discredit on a neighbour,
who looks with scorn on the vile,
but honours those who fear Yahweh,
who stands by an oath at any cost,
who asks no interest on loans,
who takes no bribe to harm the innocent.
No one who so acts can ever be shaken.