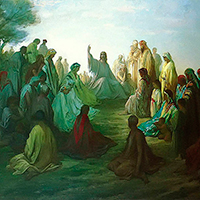 
2) Gospel Reading - Luke 6,12-19
Now it happened in those days that Jesus went onto the mountain to pray; and he spent the whole night in prayer to God. When day came he summoned his disciples and picked out twelve of them; he called them ‘apostles’: Simon whom he called Peter, and his brother Andrew, James, John, Philip, Bartholomew, Matthew, Thomas, James son of Alphaeus, Simon called the Zealot, Judas son of James, and Judas Iscariot who became a traitor.
He then came down with them and stopped at a piece of level ground where there was a large gathering of his disciples, with a great crowd of people from all parts of Judaea and Jerusalem and the coastal region of Tyre and Sidon who had come to hear him and to be cured of their diseases.
People tormented by unclean spirits were also cured, and everyone in the crowd was trying to touch him because power came out of him that cured them all.

3) Reflection
• The Gospel today presents two facts: the choice of the twelve apostles (Lk 6, 12-16) and the enormous crowds who want to meet Jesus (Lk 6, 17-19). The Gospel today invites us to reflect on the Twelve who were chosen to live with Jesus, being apostles. The first Christians remembered and registered the name of these twelve and of some other men and women, who followed Jesus and who, after His Resurrection, began to create the communities for the world outside. Today, also, all remember some catechists or persons, significant for their own Christian formation.
• Luke 6, 12-13: The choice of the 12 apostles. Before choosing the twelve apostles definitively, Jesus spent a whole night in prayer. He prays in order to know whom to choose and then chooses the Twelve, whose names are in the Gospels and they will receive the name of apostles. Apostle means sent, missionary. They were called to carry out a mission, the same mission that Jesus received from the Father (Jn 20, 21). Mark is more concrete and says that God called them to be with him and he sends them on mission (Mk 3, 14)..
• Luke 6, 14-16: The names of the 12 Apostles. With small differences the names of the Twelve are the same in the Gospels of Matthew (Mt 10, 2-4), Mark (Mk 3, 16-19) and Luke (Lk 6, 14-16). The majority of these names come from the Old Testament. For example, Simeon is the name of one of the sons of the Patriarch Jacob (Gn 29, 33). James (Giacomo) is the same name of Jacob (Gn 25, 26), Judah is the name of the other son of Jacob (Gn 35, 23). Matthew also had the name of Levi (Mk 2, 14), the other son of Jacob (Gn 35, 23) Of the twelve apostles, seven have a name that comes from the time of the Patriarchs: two times Simon, two times, James, two times Judah, and one time Levi! That reveals the wisdom and the pedagogy of the people. Through the names of the Patriarchs and the matriarchs, which were given to the sons and daughters, people maintained alive the tradition of the ancestors and helped their own children not to lose their identity. Which are the names which we give our children today?
• Luke 6, 17-19: Jesus goes down from the mountain and people are looking for him. Coming down from the mountain with the twelve, Jesus finds an immense crowd of people who were trying to hear his words and to touch him, because people knew that from him came out a force of life. In this crowd there were Jews and foreigners, people from Judaea and also from Tyre and Sidon. These were people who were abandoned, disoriented. Jesus accepts all those who look for him Jews and Pagans! This is one of the themes preferred by Luke!
These twelve persons, called by Jesus to form the first community, were not saints. They were common persons, like all of us. They had their virtues and their defects. The Gospels tell us very little on the temperament and the character of each one of them. But what they say, even if not much is for us a reason for consolation.
- Peter was a generous person and full of enthusiasm (Mk 14, 29.31; Mt 14, 28-29), but at the moment of danger and of taking a decision, his heart becomes small and cannot go ahead (Mt 14, 30; Mc 14, 66-72). He was even Satan for Jesus (Mk 8, 33). Jesus calls him Rock (Peter). Peter of himself was not ‘Pietra’ - Rock, he becomes Rock (Pietra) because Jesus prays for him (Lc 22, 31-32).
- James and John are ready to suffer with and for Jesus (Mk 10, 39), but they were very violent (Lk 9, 54), Jesus calls them “sons of thunder” (Mk 3, 17). John seemed to have some sort of envy. He wanted Jesus only for his group (Mk 9, 38).
- Philip had a nice welcoming way. He knew how to put others in contact with Jesus (Jn 1, 45-46), but he was not too practical in solving the problems (Jn 12, 20-22; 6, 7). Sometimes he was very naïve. There was a moment when Jesus lost his patience with him: Have I been with you all this time, Philip, and you still do not know me? (Jn 14, 8-9).
- Andrew, the brother of Peter and friend of Philip, he was more practical. Philip goes to him to solve the problems (Jn 12, 21-22). Andrew calls Peter (Jn 1, 40-41), and Andrew found the boy who had five loaves of bread and two fish (Jn 6, 8-9).
- Bartholomew seems to be the same as Nathanael. This one was from there and could not admit that anything good could come from Nazareth (Jn 1, 46).
- Thomas was capable of sustaining his own opinion, for a whole week, against the witness of all the others (Jn 20, 24-25). But when he saw that he was mistaken, he was not afraid to acknowledge his error (Jn 20, 26-28). He was generous, ready to die with Jesus (Jn 11, 16).
- Matthew or Levi was a Publican, a tax collector, like Zaccheus (Mt 9, 9; Lk 19, 2). They were persons who held to the system of oppression of that time.
- Simon, instead, seems that he belonged to the movement which radically opposed the system which the Roman Empire imposed on the Jewish people. This is why he was also called Zealot (Lk 6, 15). The group of the Zealots even succeeded to bring about an armed revolt against the Romans.
- Judah was the one who was in charge of the money in the group (Jn 13, 29). He betrayed Jesus.
- James, son of Alphaeus and Judas Taddeus. The Gospels say nothing of these two, they only mention their name.

4) Personal questions
• Jesus spends the whole night in prayer to know whom to choose, and then he chooses those twelve. Which conclusions can you draw?
• Do you recall the persons who began the community to which you belong? What do you remember about them: the content of what they taught or the witness they gave?

5) Concluding Prayer
They shall dance in praise of his name,
play to him on tambourines and harp!
For Yahweh loves his people,
he will crown the humble with salvation. (Ps 149,3-4)