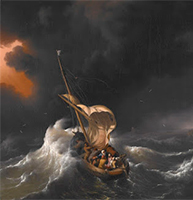 2) Gospel Reading - Matthew 14,22-36
At once Jesus made the disciples get into the boat and go on ahead to the other side while he sent the crowds away. After sending the crowds away he went up into the hills by himself to pray.
When evening came, he was there alone, while the boat, by now some furlongs from land, was hard pressed by rough waves, for there was a head-wind. In the fourth watch of the night he came towards them, walking on the sea, and when the disciples saw him walking on the sea they were terrified. 'It is a ghost,' they said, and cried out in fear.
But at once Jesus called out to them, saying, 'Courage! It's me! Don't be afraid.'
It was Peter who answered. 'Lord,' he said, 'if it is you, tell me to come to you across the water.' Jesus said, 'Come.' Then Peter got out of the boat and started walking towards Jesus across the water, but then noticing the wind, he took fright and began to sink. 'Lord,' he cried, 'save me!'
Jesus put out his hand at once and held him. 'You have so little faith,' he said, 'why did you doubt?' 32 And as they got into the boat the wind dropped. 33 The men in the boat bowed down before him and said, 'Truly, you are the Son of God.'
Having made the crossing, they came to land at Gennesaret. When the local people recognised him they spread the news through the whole neighbourhood and took all that were sick to him, begging him just to let them touch the fringe of his cloak. And all those who touched it were saved.

3) Reflection
• The Gospel today describes the difficult and tiresome crossing of the sea of Galilee in a fragile boat, pushed by a contrary wind. Between the discourse of the Parables (Mt 13) and of the Community (Mt 18), there is once again, the narrative part (Mt 14 to 17). The discourse of the Parables calls our attention again on the presence of the Kingdom. Now, the narrative part shows the reactions in favour and against Jesus provoked by that presence. In Nazareth, he was not accepted (Mt 13, 53-58) and King Herod thought that Jesus was a sort or reincarnation of John the Baptist, whom he had murdered (Mt 14, 1-12). The poor people, though, recognized in Jesus the one who had been sent by God and they followed him to the desert, where the multiplication of the loaves took place (Mt 14, 13-21). After the multiplication of the loaves, Jesus takes leave of the crowd and ordered the disciples to cross the lake, as it is described in today’s Gospel (Mt 14, 22-36).
• Matthew 14, 22-24: To begin the crossing asked by Jesus. Jesus obliges the Disciples to go into the boat and to go toward the other side of the sea, where the land of the pagans was. He goes up to the mountain to pray. The boat symbolizes the community. It has the mission to direct itself toward the pagans and to announce among them the Good News of the Kingdom also, which was the new way of living in community. But the crossing was very tiring and long. The boat is agitated by the wave, because the wind is contrary. In spite of having rowed the whole night, there is still a great distance left before reaching the land. Much was still lacking in the community in order to be able to cross and go toward the pagans. Jesus did not go with his disciples. They had to learn to face together the difficulties, united and strengthened by faith in Jesus who had sent them. The contrast is very great: Jesus is in peace together with God, praying on the top of the mountain, and the Disciples are almost lost there below, in the agitated sea.
• The crossing to the other side of the lake symbolizes also the difficult crossing of the community at the end of the first century. They should get out of the closed world of the ancient observance of the law toward the new manner of observing the Law of love., taught by Jesus; they should abandon the knowledge of belonging to the Chosen People, privileged by God among all other peoples, for the certainty that in Christ all peoples would be united into one Only People before God; they should get out from isolation and intolerance toward the open world of acceptance and of gratitude. Today also, we are going through a difficult crossing toward a new time and a new way of being Church. A difficult crossing, but which is necessary. There are moments in life in which we are attacked by fear. Good will is not lacking, but this is not sufficient. We are like a boat faced with the contrary wind.
• Matthew 14, 25-27: Jesus comes close to them but they do not recognize him. Toward the end of the night, that is between three and six o’clock in the morning, Jesus goes to meet the Disciples. Walking on the water, he gets close to them, but they did not recognize him. They cried out in fear, thinking that it was a ghost. Jesus calms them down saying: “Courage! It is me! Do not be afraid!” The expression “It is me!” is the same one with which God tried to overcome the fear of Moses when he sent him to liberate the people from Egypt (Ex 3, 14). For the communities, of today as well as for those of yesterday, it was and it is very important to be always open to novelty: “Courage. It is me!. Do not be afraid!”
• Matthew 14, 28-31: Enthusiasm and weakness of Peter. Knowing that it is Jesus, Peter asks that he also can walk on the water. He wants to experience the power which dominates the fury of the sea. This is a power which in the bible belongs only to God (Gn 1, 6; Ps 104, 6-9). Jesus allows him to participate in this power. But Peter is afraid. He thinks that he will sink and he cries out: “Lord, save me!” Jesus assures him and takes hold of him and reproaches him: “You have so little faith! Why did you doubt?” Peter has more strength than he imagined, but is afraid before the contrary waves and does not believe in the power of God which dwells within him. The communities do not believe in the force of the Spirit which is within them and which acts through faith. It is the force of the Resurrection (Eph 1, 19-20).
• Matthew 14, 32-33:Jesus is the Son of God. Before the waves that come toward them, Peter begins to sink in the sea because of lack of faith. After he is saved, he and Jesus, both of them, go into the boat and the wind calms down. The other Disciples, who are in the boat, are astonished and bowed before Jesus, recognizing that he is the Son of God: “Truly, you are the Son of God”. Later on, Peter also professes the same faith in Jesus: “You are the Christ, the Son of the living God!” (Mt 16,16). In this way Matthew suggests that it is not only Peter who sustains the faith of the Disciples, but also that the faith of the Disciples sustains Peter’s faith.
• Matthew 14, 34-36: They brought all the sick to him. The episode of the crossing ends with something beautiful: “Having made the crossing they came to Gennesaret. When the local people recognized him they spread the news through the whole neighbourhood and took all who were sick to him, begging him just to let them tough the fringe of his cloak. And all those who touched it were saved”.

4) Personal questions
• Has there been a contrary wind in your life? What have you done to overcome it? Has this happened sometimes in the community? How was it overcome?
• Which is the crossing which the communities are doing today? From where to where? How does all this help us to recognize today the presence of Jesus in the contrary waves of life?

5) Concluding Prayer
Keep me far from the way of deceit,
grant me the grace of your Law.
I have chosen the way of constancy,
I have moulded myself to your judgements. (Ps 119,29-30)