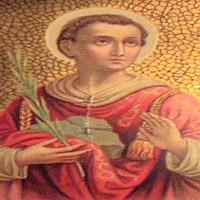 First Christian martyr. Deacon. Preacher. All we know of him is related in the Acts of the Apostles. While preaching the Gospel in the streets, angry Jews who believed his message to be blasphemy dragged him outside the city, and stoned him to death. In the crowd, on the side of the mob, was a man who would later be known as Saint Paul the Apostle.