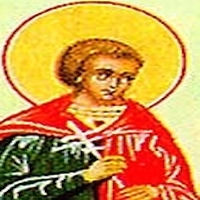 Born to wealthy, prominent and non-Christian family. Brother of Saint Aedesius of Alexandria. Well educated, studying rhetoric, philosophy and civil law in Beirut, Lebanon. Convert to Christianity. Friend of Eusebius of Caesarea; the pair made a pilgrimage to Palestine. Studied under Saint Pamphilus.

In May 305, Emperor Maximinus declared that everyone should take part in public sacrifices in celebration of his coronation. When it came time for the sacrifices in his city, Appian went to the temple and stopped the official, Urbanus, from offering incense to an idol, explaining that it was impious to worship an idol instead of the true God, and berating the judge for doing it. Appian was beaten, imprisoned, his flesh torn off with iron claws, and roasted over a slow fire. He was then ordered to sacrifice to the Roman gods; he declined. Martyr.